Many of you must have heard or even played the popular guessing game ‘Dumb charades’. In which, a person tries to tell a name of a movie through his action and you have to guess the movie name. Not so surprisingly, most of the time, you were even able to guess it right just by paying attention to his actions.

Now think about our daily life, you’ll realise we often say many things through our actions or gestures without actually uttering a word. Like, a thumbs up for showing approval or saying something is right. Similarly, a thumbs down for showing disapproval or showing a flat palm for telling someone to stop. These are some of the universal gestures. 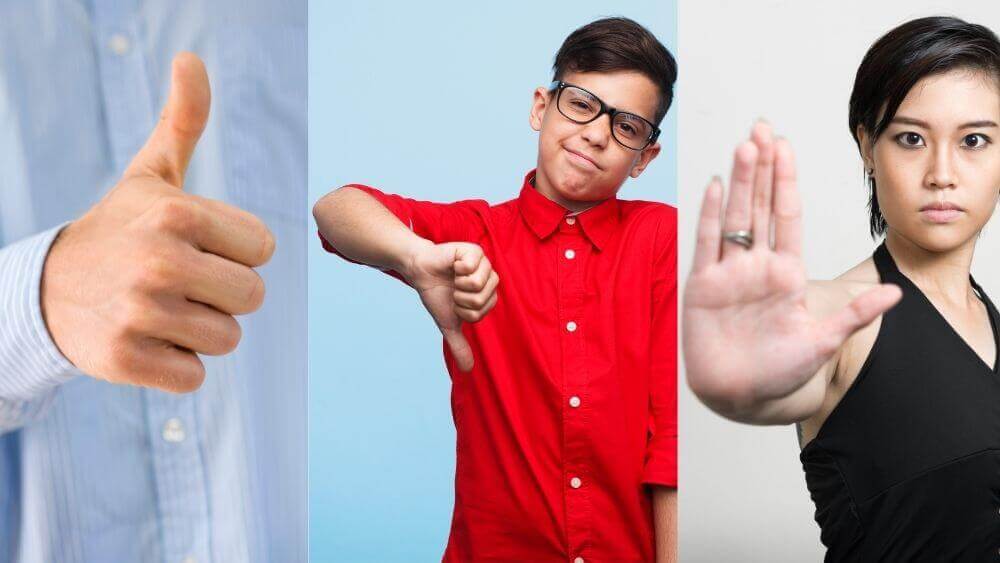 Have you ever noticed a baby, who is yet to learn to speak? How the mother and people around the baby are able to understand, what a baby is trying to say or what he wants? Well, they are able to do this by observing the body gestures of the baby. For example, when babies want something they either pull your clothes or point their finger towards the thing they want, when babies are full after eating and you try to feed them more, they shake their head in a no.

Isn’t it amusing, how we and even a baby can say something without even speaking?

This context of saying something without speaking is not only limited to any game or some basic gestures used in everyday life. There’s a well-developed language meant for communicating without speaking. It’s known as Sign-language.

Sign-language was created to help all the people with the inability to speak or hear so that they can also communicate smoothly. They are taught to convey their message using body gestures, which are a bit complex than the universal gestures. Although sign language is meant for people with inabilities, a normal person can also learn this. It’s like the cream of the crop if someone knows sign -language, as they can communicate with anyone in this world.

Apart from sign language or any gesture used by all of us, there are other tools of communication that can be used to say something without speaking and that’s our facial expressions and eye contact.

Do you know why everyone always advises us to mind our facial expressions, whenever we are going for an interview or social gatherings? Well, that’s because our face is capable of saying things we don’t say out loud. A person can tell, what you are thinking or how you are feeling, just by paying close attention to your eyes and facial expressions.

Most of the time, we have very little or no control over our facial expressions. For example, imagine you are sitting in a group, chatting cheerfully and suddenly a person you don’t like walks in, what would you do?

Most probably, you’ll roll your eyes making a despising face without even realising that what you just did. And if someone in the group, accidentally noticed you rolling your eyes, they’ll easily guess that you don’t like the person. Similarly, your nervousness, fear, confusion etc can be easily detected just by your facial expressions, even when you didn’t say it loud that you are nervous, afraid or confused.

Now imagine yourself in a situation where it’s not appropriate to say something openly. In such situations, facial expressions and eye contact come in handy, they can help you to convey your message to someone without saying anything or understanding what another person is trying to say to you.

Let me give you a perfect example, imagine you went to someone’s house with your mother and they served you tea and snacks. You were just going to pick a biscuit when you saw your mother looking at you with big eyes as if she’s trying to say “dare you to touch that biscuit” and you just immediately retract your hand. This is how she was able to convey her message to you using her facial expressions, without actually saying anything and you were able to understand.

Facial expression plays a crucial role in communication, immaterial of the fact that one can speak or not. Can you imagine a person who can’t speak praising you by sign language but with a stiff face? It’ll seem like they are doing it although they don’t really want to. Even when a person who can speak praises you without any expression on their face, it’ll seem like they are doing it for formality. This kind of things can make the situation awkward. So, always mind your expressions while communicating with someone, in social gatherings, interviews, etc.

So, I hope now you have an idea about how we can say something without actually speaking.