For the special occasion of Cinco De Mayo, we have come up with a new set of colouring worksheets for all the young learners out there. Now before we get started on the fun activity, let’s learn a little bit about Cinco De Mayo. Cinco De Mayo is the annual celebration commemorating the victory of Mexico, a country in southern North America, over the French Empire in the Battle of Puebla in 1862.

“Cinco De Mayo” literally translates to “Fifth of May” in Spanish and is celebrated on the 5th of May every year in the United States of America and Mexico. It is a day to celebrate the rich and diverse Mexican culture and for everyone to have fun and enjoy themselves.

Without further ado, let’s get started! 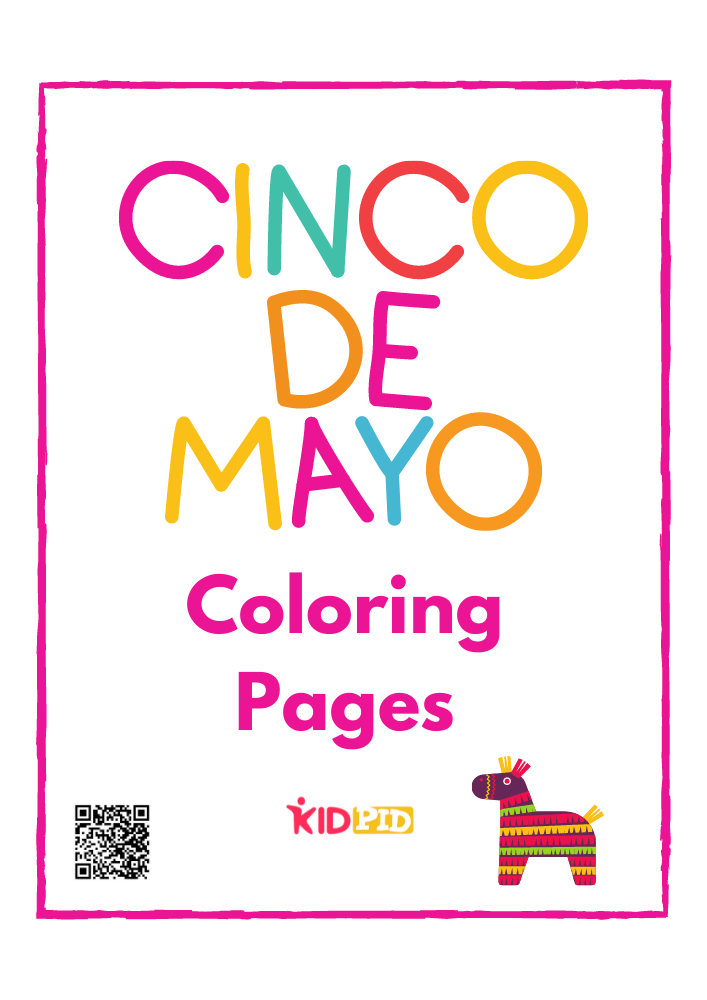 The first worksheet shows a “sombrero” which refers to a specific type of wide-brimmed hat commonly worn by people in Mexico and the southwestern U.S. The wide shape provides protection from the sun. Along with the sombrero are rattles known as maracas, a type of musical instrument frequently featured in the Caribbean and Latin music. 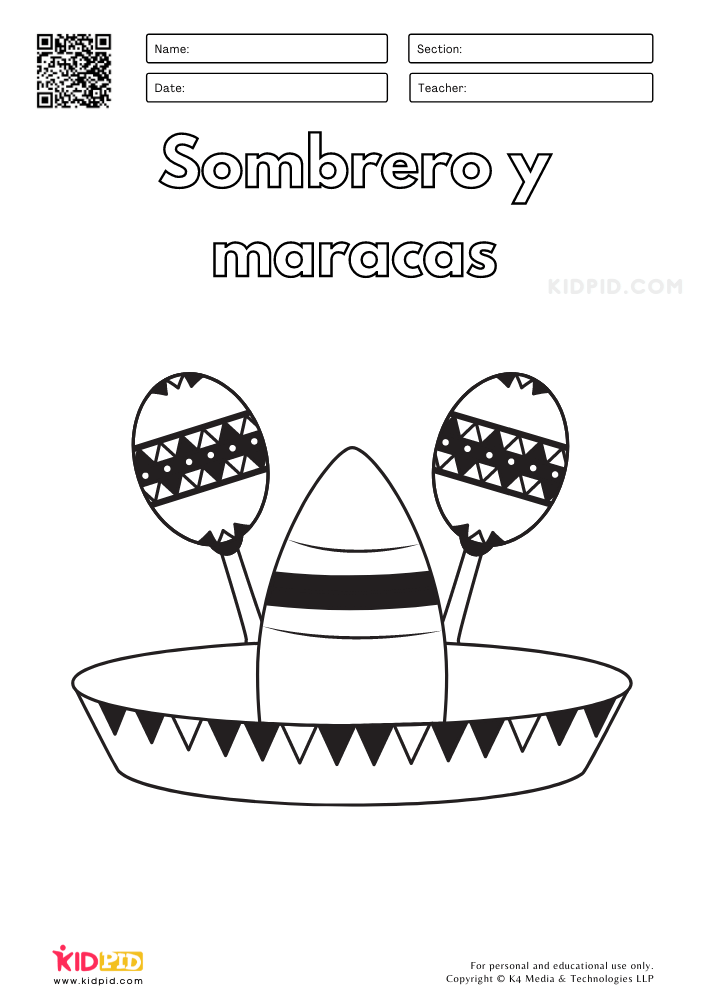 Now, most kids these days have seen pinatas at their birthday parties but interestingly enough this tradition actually originated in Mexico. During birthday parties and Christmas celebrations, children used to take turns trying to break the brightly decorated paper animal to release sweets, small fruits, toys and nuts. The word pinata is Spanish and translates to ‘pot’. 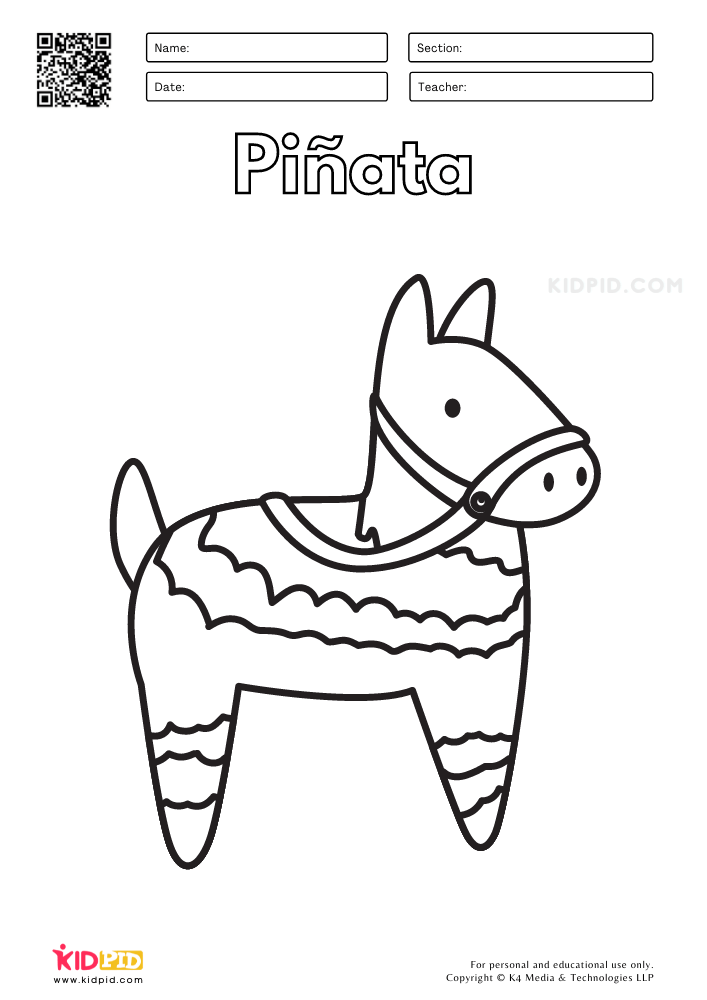 This worksheet depicts some common and classic Mexican musical instruments – maracas and the Spanish guitar. The sombrero is shown here again as traditional Mexican musicians typically wear colourful sombreros when they perform. 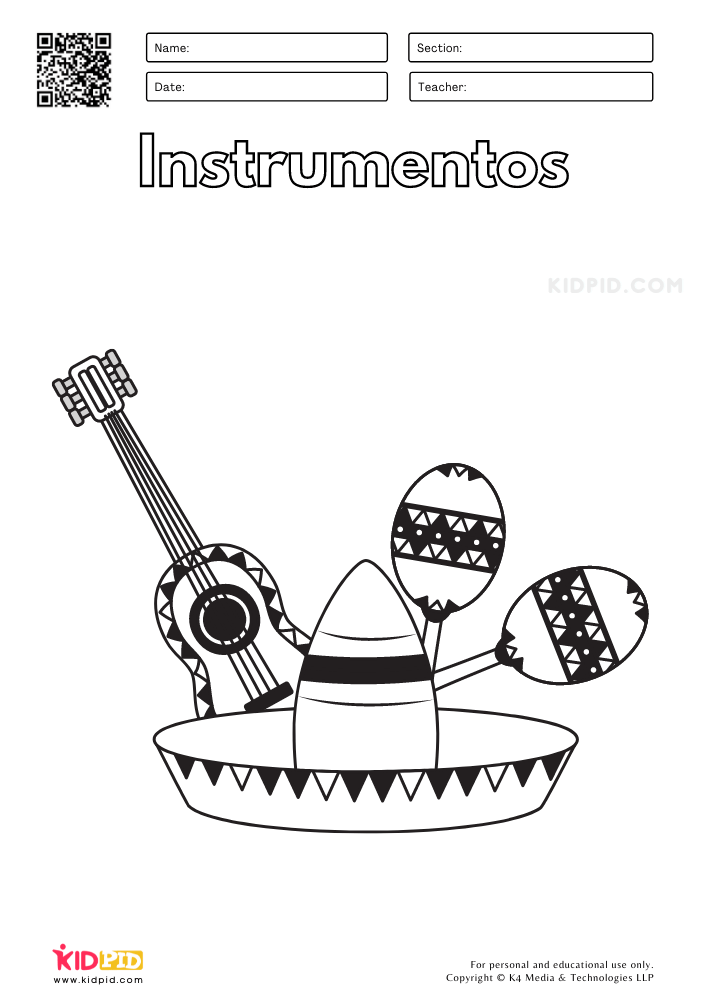 This is the fourth worksheet depicting a cactus playing the guitar. The cactus is an important symbol of cultural and historical significance in Mexico – it is in fact featured in the coat of arms of the Mexican flag. 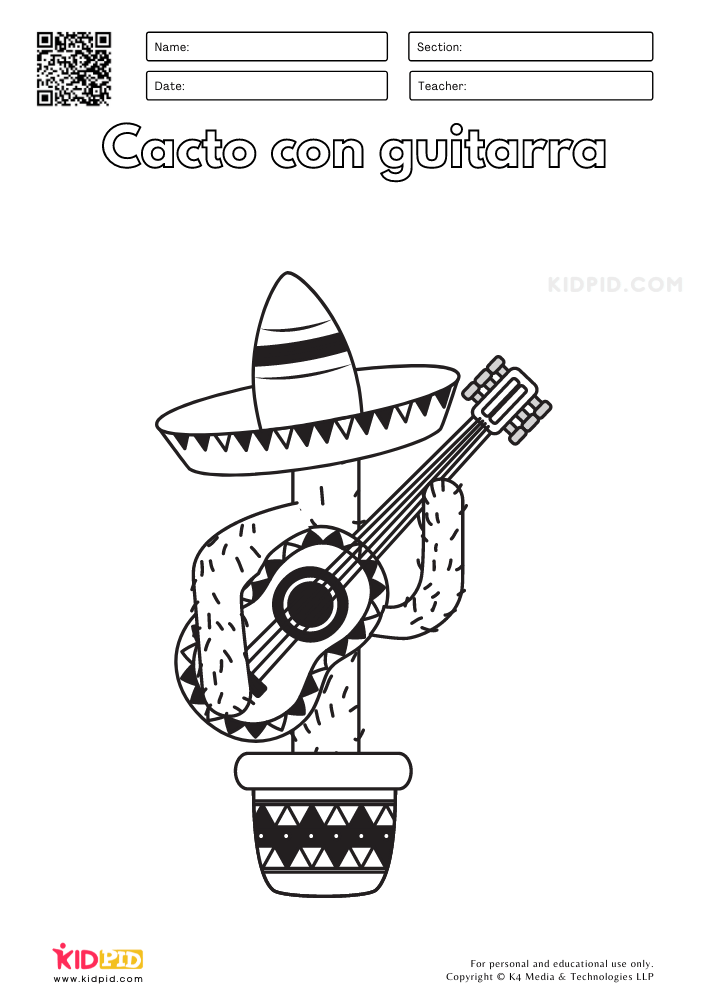 This is the fifth worksheet depicting a cactus wearing a sombrero. The legend is that the gods told the Aztecs to build their city and lay their ground where they find an eagle perched on a cactus eating a serpent. That is the exact illustration that is depicted on the Mexican flag emphasizing the significance of cacti in their history and culture. 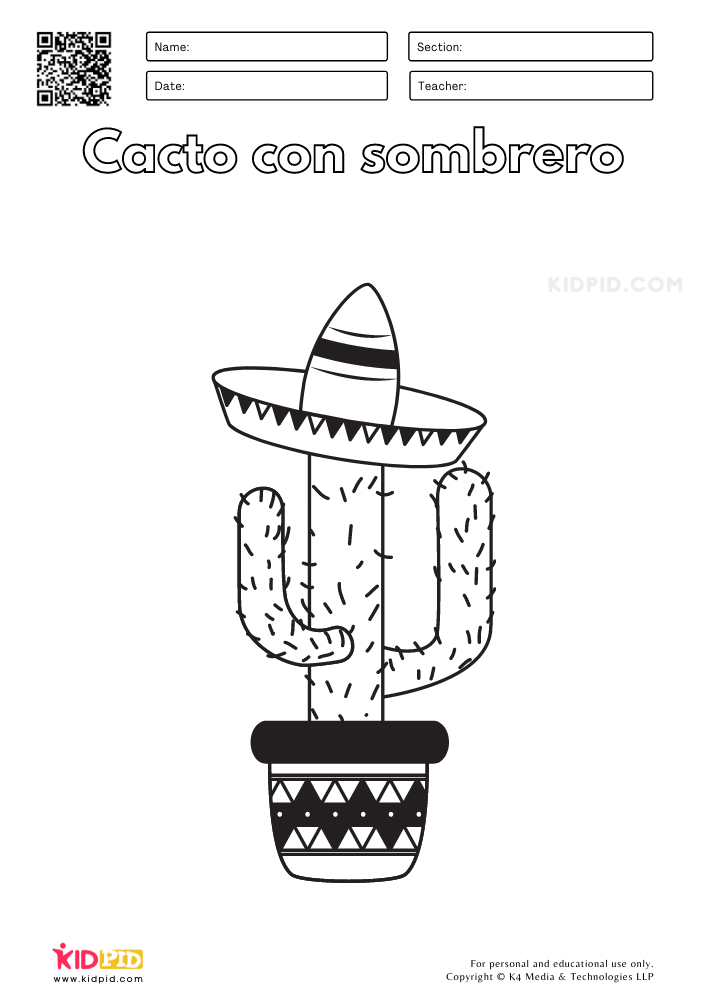 This is the sixth worksheet showing a sombrero, a cactus and a chilli. While we already understand the importance of the sombrero and cactus in Mexican culture, what’s the deal with the chilli? Chillies are in fact a very common food item in Mexican culture and are a local favourite. Chilli peppers were even used as currency in commercial transactions in Mexico! 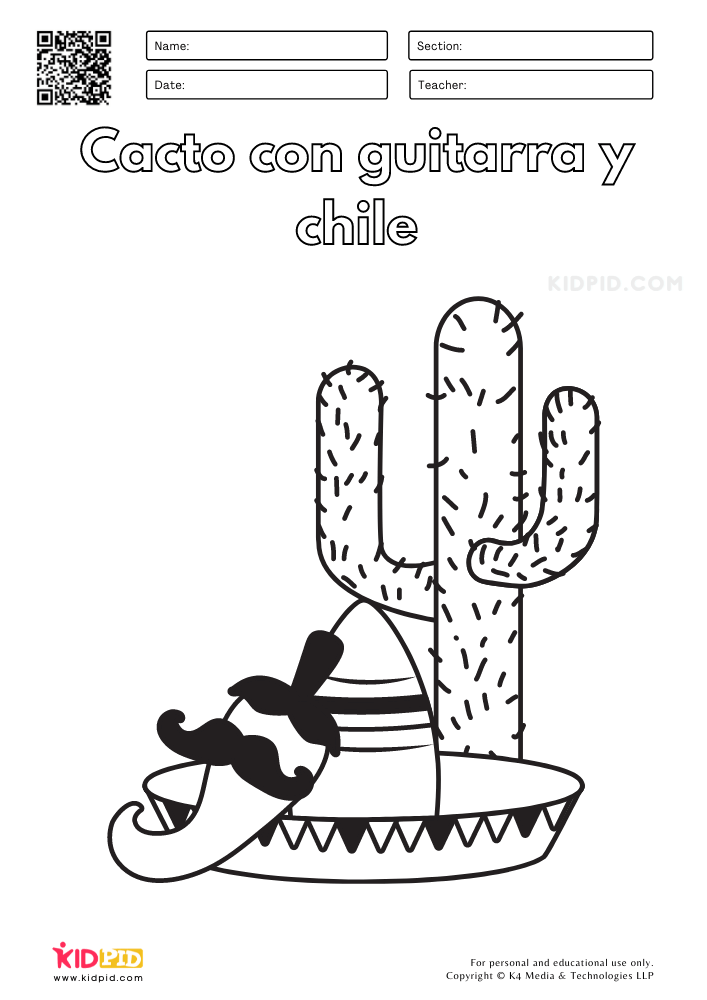 The seventh worksheet represents some common yet significant aspects of Mexican culture. 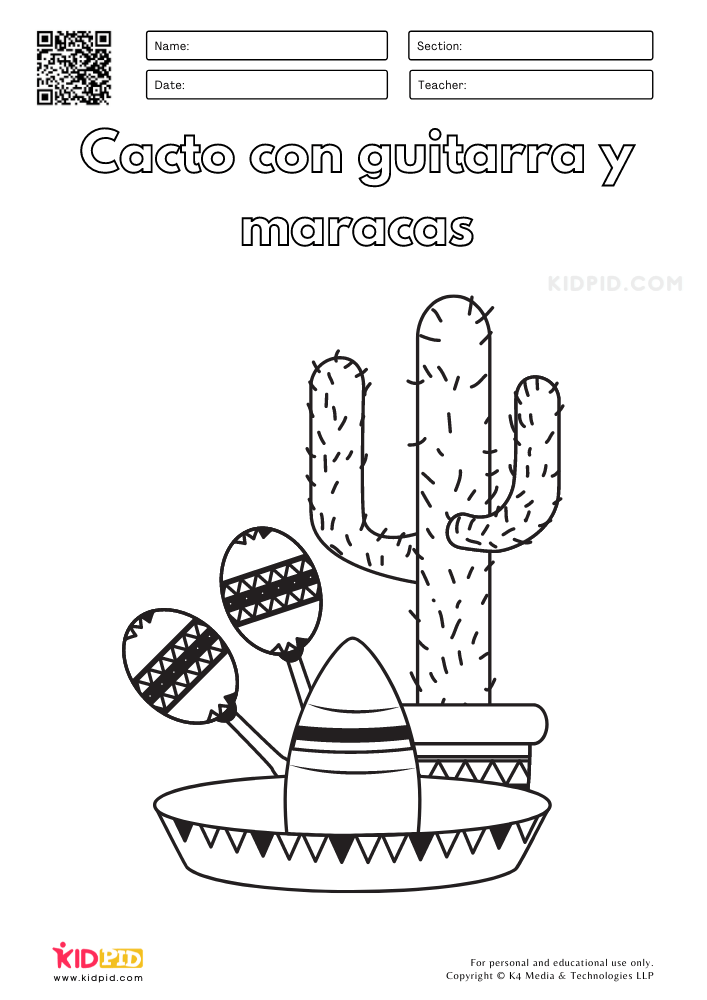 Cacti are not only historically significant in Mexico, but they are also commonly found in Mexico and interestingly enough, are widely used as a food item. Yes, believe it or not, cacti are a staple in Mexican cuisine, found everywhere, from the local street vendors to fine dining restaurants. 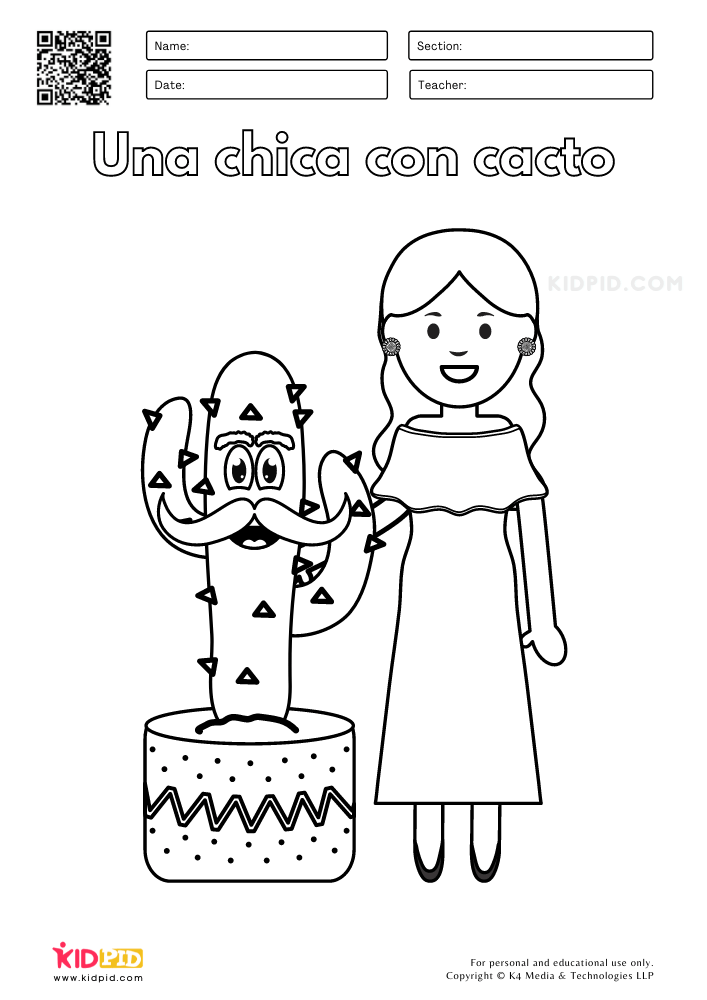 This is the final worksheet depicting a sombrero and maracas. These items have the traditional Aztec print on them adding to their beauty and charm. 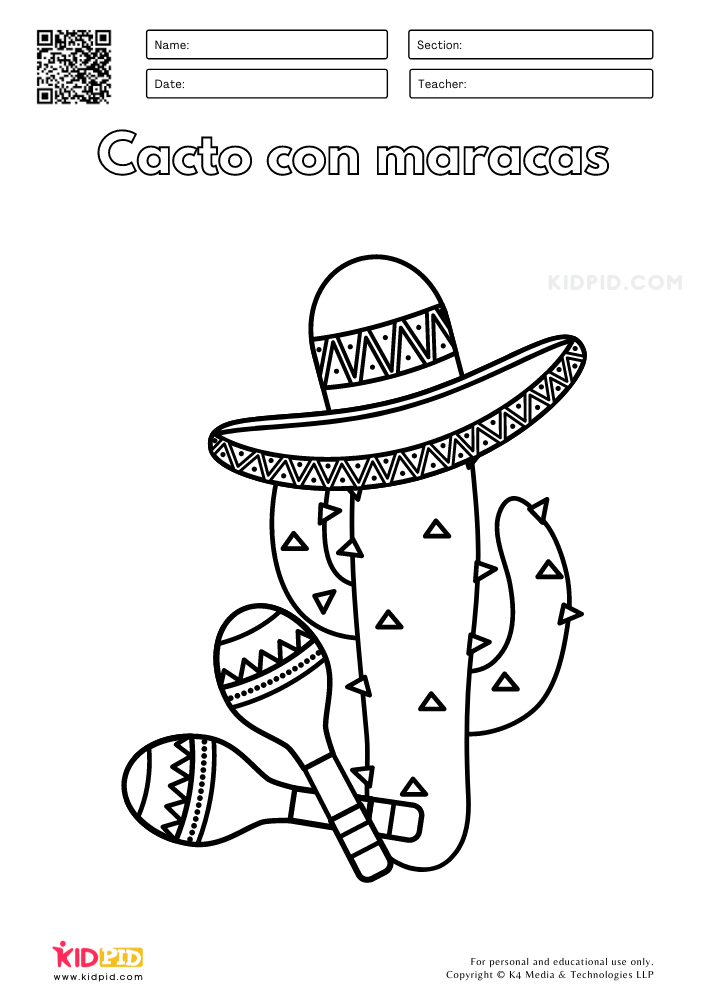 So, what are you waiting for?

Download your worksheets, print them out and get started on the fun today!