Know About ‘The Tragedy of the Commons’

A tragedy of commons explains the overexploitation, carelessness, greediness and the short-term benefits at any cost behavior of human beings. One example like- road exploitation people these days clearly want to have private transport to reach the places as soon as possible this cause heavy jam and other related issues. But human at our best has shown that we can solve the problem or use things efficiently and we can continue to do so if we remember that we live in world of scarce resources when the tragedy of commons applies.

Aristotle said “What is common to the greatest number gets the least amount of care.” Everyone loves their personal things and use them efficiently but exploits the things that belongs to others. Tragedy of commons is something related to this thought.

Tragedy of the Commons

Let us take an example which we can relate to your real life. As we know roads are common property which can be shared by many people. Every next person is acting according to their self-interest. In the earlier time, the traffic jams were rarely seen on the road. As the technology advances priority of people changes from public to private transport. Everyone wants to reach his destination as early as he can, this is what we can say the self-interest. Let me explain you in detail, with an experiment. Suppose there are 20 houses in a city and in every house there are four members. And there is single road which connects these houses to the market, school and office. Now only 10 houses means 10 people have a car. And the other people commute through public transport. So there is no traffic, as there are only maximum 10 to 12 vehicles at a certain time on the road. Now as the time and lifestyle changes with the modernization of technology, many other people also want to buy their own vehicle, thinking that road is public and free and nothing will effect traffic with their one car. And of course, this thought came in other’s mind too.

Here’s how the moths work, now suppose 20 house has their own personal vehicles. Now with according to time and need. Other 2 or 3 of 4 member of each house also buy car for personal sake that is to commute fast and in easy way. So now there is around 50 to 80 cars on the road at peak hours. Eventually this will lead to traffic jam, which causes delay to everyone in reaching their destination.

This road is just one example of classic problem, called tragedy of the commons. 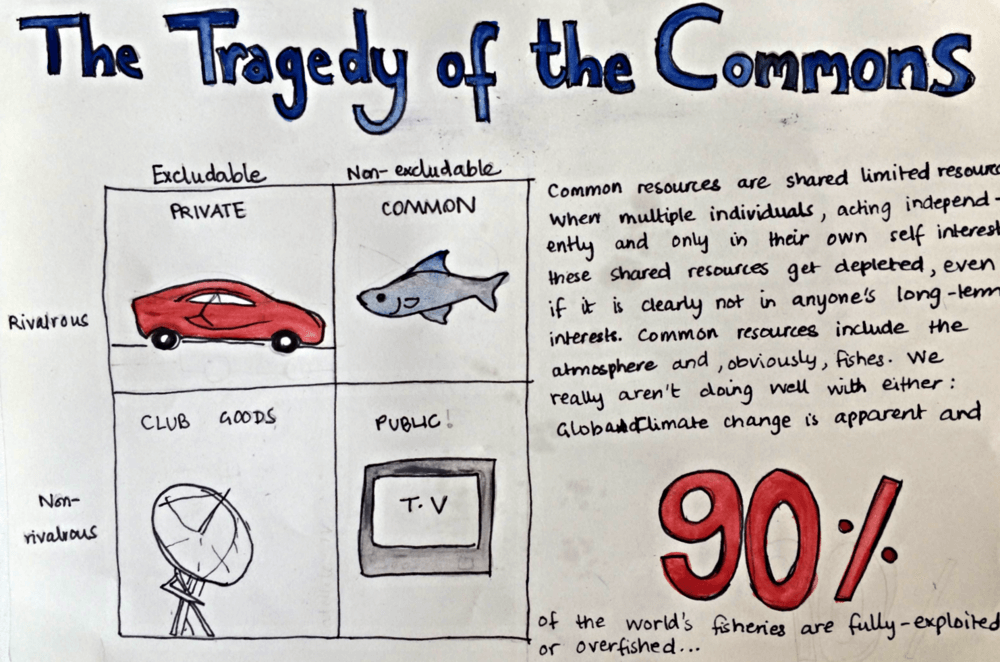 This phenomenon was first described by economist William Forster Lloyd in 1833. Forster noticed something fascinating about the so called common pastures. In other words, pasture without an owner, which can be used by everyone, were in considerably worse shape than which had an owner. Why? Simply because the short term self-interest of the people who were using those pasture made them consume too many resources and in the long run everyone suffered. Like George, who is grazing his cow in a common pasture, ask himself. Should I buy another cow? And decided that yes, he would make more money in that way. He knows he was overloading the pasture but didn’t care, he wanted the extra money. The problem is that everyone did the same thing. In the end, pasture was eventually overloaded and therefore became unusable. Some people made short term profit but in long run everyone lost. As far as the pasture which had an owner were concerned. This didn’t happen because it was in the best interest of the owner to exploit their property sustainably.

Ecologist Hardin received the concept to describe what happens when many individual all share limited resources like grazing land, fishing pond, living space, even clean air. In these situations people fulfill their short term self-interest against the common good. And which spreads out the negative impact on large numbers of people, in the form of social problems like overgrazing, traffic, over fishing, over population, pollution and social environment problem.

To see what that means, let’s revisit our public road example. Here each family or individual has concerned about their own interest or benefit only. As they just want to get their work done quickly and easily as possible. So everyone used that public road without caring about traffic jam and pollution. Families will conclude that it’s in their best interest to take an extra car, or two…or three. Unfortunately, this is the same conclusion reached by the other families too and that’s the tragedy. Optimizing for the self in the short term isn’t optimal for anyone in the long term.

That’s the simplified example, but the tragedy of the common plays out in the more complex system of real life too.

There are other examples too littering, vandalism, water shortage, deforestation, fishing, even the purchase of bottle waters. And we also have a live example of Capetown water shortage problem.

But human civilization has proven it’s capable of doing something remarkable. We form social contract, we make communal agreements, we elect government and we pass laws. For example in the case of public road, to control traffic congestion, government can turn these roads to toll roads at the rush hours. All of this to save our collective resources from our own individual impulses. It isn’t easy, and we certainly, don’t get it right nearly all of the time. But human at our best have shown that we can solve the problem or use things efficiently and we can continue to do so if we remember that we live in world of scarce resources, when the tragedy of commons applies.

So now we get that, what’s good for all of us is good for each of us.