Our national flag is not just a flag; there are so many brave stories behind this flag, so many freedom fighters fought for our nation’s freedom, it gives an identity to our country and its people, it remembers us our victories, struggles, it recognises us who we are today, whenever we see at our flag we feel happy and proud. Our flag consists of three colours: saffron colour on the top, white in the middle with the wheel in the center and green at the bottom. Our national flag was adopted on July 22, 1947. It was designed by Pingali Venkayya. We must respect our flag.

Our national flag is our pride. It is a symbol of our ideology, it expresses sacrifices of our freedom fighters, and it tells what kind of people we are. Mahatma Gandhi said ‘A flag is a necessity for all nations.’  In fact, our national flag symbolizes our identity. What do you think? When a sports person sings the national anthem and our tricolour flag is flying high, how do you feel?  Our heart becomes full of pride and joy, doesn’t it? 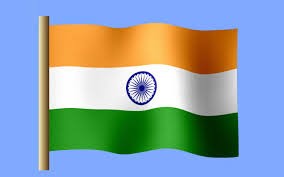 In this discussion a description of our flag is needed. Our national flag was adopted on July 22, 1947. It was designed by Pingali Venkayya. It is rectangular in shape. Its dimension is in the ratio of 2:3 and cloth material is khadi cotton or silk. Our flag consists of three bands of colours: saffron colour on the top, white in the middle and green at the bottom. These three bands of colours are of equal width. There is a wheel in the centre of the white colour band. The wheel has 24 spokes and its colour is navy blue. The wheel was taken from the Asoka pillar – the Lion Capital. But this is only a physical description of our flag.

In the year of 1921, Gandhiji first proposed for a national flag to the Indian national congress. At first there was a spinning wheel at the centre of the flag. It symbolises Gandhiji’s dream of making India a self-dependent nation which will produce her own resources. Later this flag was modified. Our flag has been modified several times. 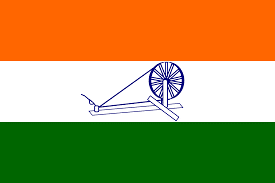 Some other pictures of early versions of the national flag are given below along with the present tricolour flag:

All the three colours of our flag have their own distinct implications.  Each colour of the flag represents the Indian culture, its greatness, and the beliefs of countrymen.  On the top of the flag, the colour saffron represents the devotion, sacrifice and freedom from materialism. In other words this colour indicates renunciation. Our first vice president, Sarvepalli Radhakrishnan, was a great philosopher and teacher, later becoming the second president of India, said that our leaders must be indifferent to material gains and must dedicate themselves to their works.

According to him, the white colour in the middle is for light, the path of good to guide our conduct. This colour stands for truth, peace, purity, and harmony.

He signified Ashoka Chakra in the centre of the white colour as the wheel of the law of Dharma. According to him truth or satya, dharma or virtue ought to be the controlling principle of those who work under this flag. Again the wheel denotes motion. That means, we will always move forward, we will accept the changes for right cause, for prosperity, for goodness. The white strip and Ashoka Chakra together also stand for respect to other religion.

Rules or Protocol of displaying our National Flag

The entire people of the nation should know and maintain these protocols. Because we should show our respect to our National flag under any circumstances. If anyone disobeys these protocols, it is punishable by law. Also one should protest if somebody disobeys them and should inform concerned authority about the incident. As a citizen of India, it is our duty.

Our national flag reminds us of our freedom fighters. We are enjoying our freedom at the cost of their life, their sacrifices. So the national flag always makes us feel proud, brings a feelings of glory in our mind. We must respect our tricolour flag. Salute to our flag. Jai Hind.