Why Do Stars Twinkle At Night?

Stars appear to be twinkling because of atmospheric refraction. Atmospheric refraction can be defined as the bending of the light due to earth’s atmosphere. When the light of stars travels through space towards Earth then the changing atmosphere of earth refracts or bends the light of stars in different amounts in various directions at every moment. And when the atmosphere refracts more of light the stars appear very bright and when refracts lesser then star appears dim. In this way, the amount of starlight reaching to our eyes decreases and increases so it appears to us twinkling stars.

Twinkle twinkle little star…we are all familiar with this nursery rhyme.

Whenever we look at the stars they seem to be twinkling all the time. But is it so? What do you think? In reality, stars don’t actually twinkle, they just appear to be twinkling.  Now, you may be wondering that, why do stars appear to twinkle? In short, it is due to refraction of light and earth’s atmosphere.

Now, what is Refraction of light?

To understand refraction, one must first understand how vision works, that is, how we can see things around us. We can see the objects in our surroundings because of light and the phenomenon of reflection of light. Let’s discuss this. When light from any source, like the sun or an electric bulb fall on the objects, it reflects. And when this reflected light reaches our eyes, we can see that object. In the picture below you can see that light from the sun has fallen upon the apple and it reflects back to our eyes and thus, we can see the apple.

You may have noticed that we can also see light sources; this is because the light directly from the light source reaches our eyes, thus enabling us to see the source. For example candle, torch light, sun. The sun is a natural source of light.

In the two pictures below, you can see that the rays of light directly from light sources, that is a candle and a torch, reaches our eyes and therefore, we can see the flame of the candle and the light coming from the torch. 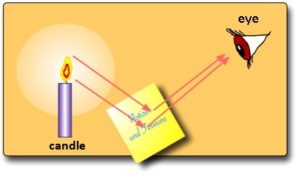 The same thing happens when we see the stars. Stars are themselves sources of light. When we see stars in the night sky, the light from the stars reach our eyes and in this way, we can see the stars.

As mentioned above stars twinkle because of refraction. So, let us discuss the process of refraction of light with the help of some examples from daily life and then it will be easier to understand ‘refraction’.

In the first two pictures below, we can see that a pencil and a spoon are immersed partly, inside a glass full of water and both the pencil and spoon look to be slightly bent at the surface of water. Why does this happen?

Well, the reason behind this is the reflected light from spoon or pencil, when it comes out from the water to the air, it changes its direction. This change of direction of light is called refraction. An important condition for refraction is that light should travel through different media with different density. Here, the different media are water and air. Now, what is density? Density may be expressed as thickness. For example, density of honey is more than that of water or density of smoke is greater than that of air.

The same thing happens if a coin is placed under water. In the picture below, we can see the coin in the tub of water appears to be raised from its true position in the bottom of the tub. This is because the light from the coin is slightly bent when it travels from the water to air. Again, this happens because of different density of water and air.

From the above examples, we can see that light changes its direction when it passes through different medium, like water to air, as shown in picture. This is known as refraction of light.

In the picture below, we can see the earth’s atmosphere. It is a layer of gases surrounding the earth like a blanket. This mixture of gases is commonly known as air. Density of the atmosphere decreases as one goes to higher altitudes,  and also our atmosphere is turbulent, that means, our atmosphere is continuously moving or in a constant state of unrest, like stream, whirlpool, churning around.

The same thing happens in the case of stars. Light of the stars also passes though earth’s atmosphere which is turbulent, and, as light passes through the atmosphere of earth, it changes its direction randomly due to refraction. As a result stars seem to be unstable or twinkling.

But perhaps you have noticed that planets don’t twinkle. The main reason is planets are closer to earth and appear as disks, not as a dot or pin point like stars and a bunch or collection of rays of light reflect off the surface of the planet. So a collection of a large number of light rays from planets, when reach to our eyes together, they cancel out the change of direction, thus their twinkling effect is cancelled out  and planets look steady.

So, next time when you will look at the twinkling star, then you already know that stars do not actually twinkle; they only seem to be twinkling.