The concept of more or fewer is one of the most essential things children need to learn just after they had learned to count numbers. Teaching children with more and fewer concepts is essential to teach them how to compare between the numbers of objects and identify which is more and which is less. Research always supports the fact that children learn better from the visual structure, which is, adding an object to a task which helps the child to learn and complete the task effectively.

To learn the concept of more or fewer, you can download and print these worksheets for your students or kids. 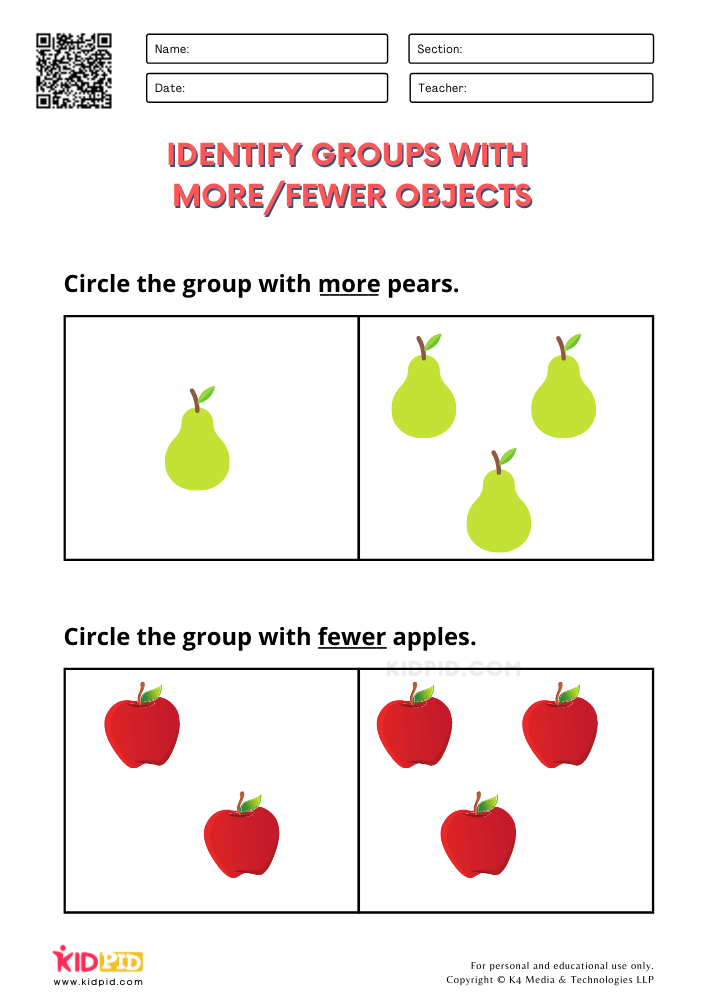 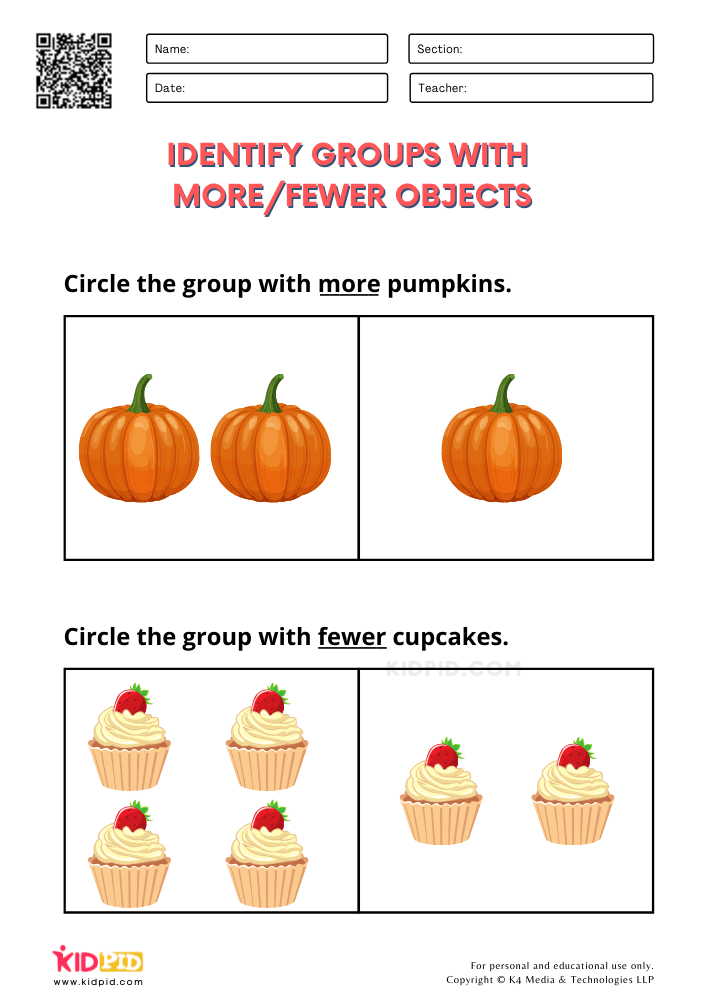 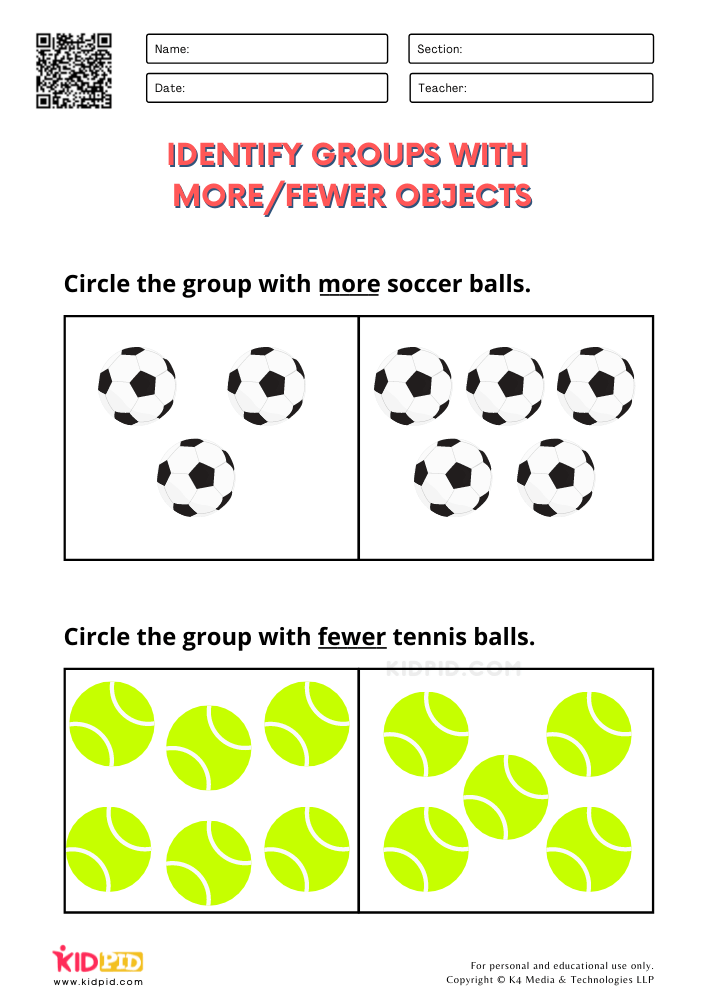 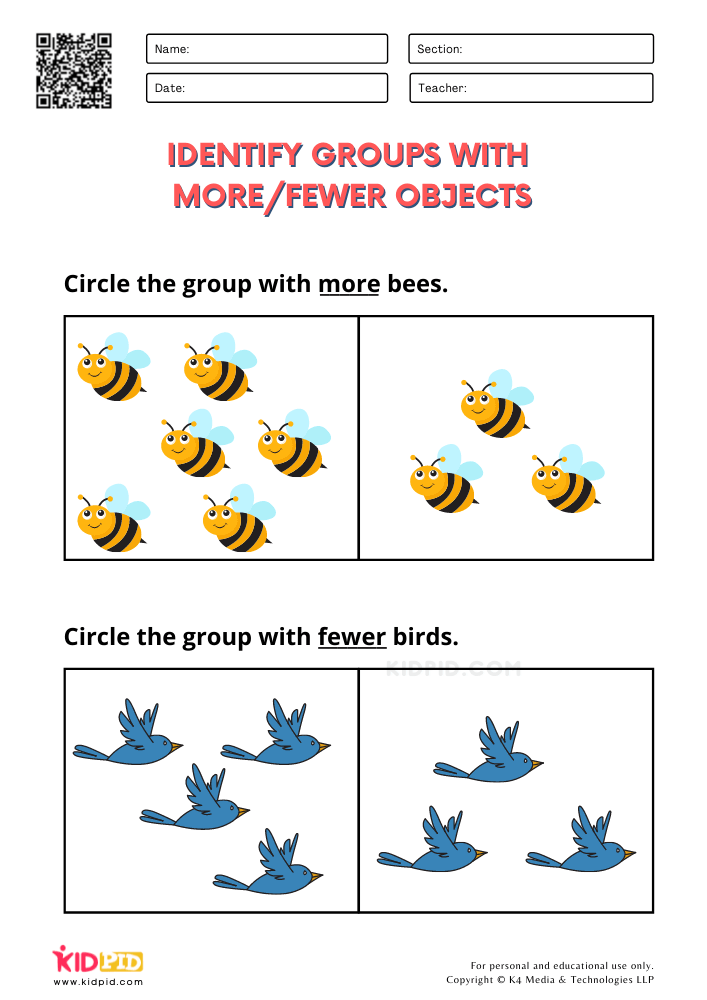 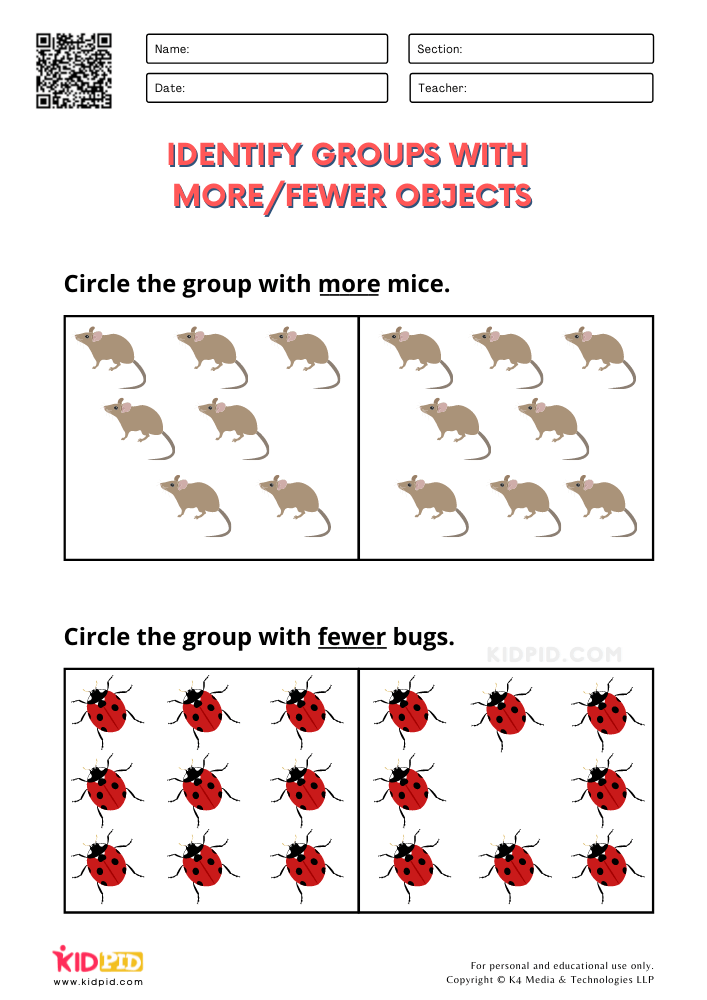 We judge if something is more or less by seeing its quantity. Quantity is the key to comparing between things and classifying them as fewer or more. As these things always exist in pairs, “this bowl has less marble than that bowl”. Fewer and more cannot exist independently.

Do you need anything before teaching your child the concept of Few & More?

First comes “PATIENCE”. Patience is very important when teaching things to children. Kids might not learn things instantly; they might need some time to get a tight grasp of some concepts. So never be impatient when teaching your child concepts like this.

Secondly, the child must know how to count objects sequentially. If they cannot count right now, then it might not be the right time to learn the concept of comparing and few and more.

Now let’s dive right into how you can teach the concept of fewer and more to children.

As children learn a lot faster through visuals, so we will use a lot of visual real-life examples to teach them.

So what is the quantity?

Quantity is the amount or number of something which can be measured. We can measure things like volumes, weights, and distance.

Now that we know what quantity is. We can say that if certain something has less quantity it can be said to be fewer than the other.

The First step: Take a number line and teach them the concept of bigger and smaller by telling them, which number is larger or smaller than which numbers. Once they become good with numbers, you can move to the second step.

The second step: Involves merging both the concepts of counting and measuring the quantity. We will now teach them using the environment you are in. As we all know children learn better when taught through visual and real examples. So in this step, we will take some real-world things and ask them the same question, “Which among these is larger in quantity?”

After you are done with the visual quantities, you can again move to the numbers and ask them to differentiate and classify the given pair of numbers into larger or smaller. For e.g.: if we give a pair, say 10 and 2 they should be able to classify two as smaller and ten as larger between the two numbers.

Like this, you can perform many more activities at home, which will also help you to teach your child the concept of fewer or more. Here, are some activities you can do:

You can play marbles with them and eventually ask them who amongst you have more marbles with them. You can also do the same while you all are eating; asking them whose plate has more or less food will also help them to clear the concept better.

We have now learned the concept of fewer and more. And as we know that we gradually become better at anything if we keep on practicing that. This worksheet will help you, which you need to solve to get better at the concept of more and less.