In 490 BC a Greek messenger named Pheidippides ran from the Greek town of Marathon to the capital Athens to deliver a message that the Greek army had just beaten back the Persians, and the distance between those two towns is 26.2 miles, and that’s the origin of the modern sporting event that we call the marathon. You might know that story, but what they don’t always tell you is that when he got to Athens after those 26.2 miles, Pheidippides died. So why on Earth would anyone want to run one of those for fun? How are our bodies even able to? I decided to find out, so I ran one. In the process, I discovered a lot about what I’m made of, in more ways than one. You guys ready to run the marathon? My training started millions of years before I ever got to the starting line. The first step to becoming a runner is, well, standing up, and bipedalism is only seen in a handful of animals, except for a few species of birds walking on two legs is only uses a temporary form of transportation. Our ancestors first stood up over three million years ago, and well we were running probably not long after that, were made for it.

There’s a whole list of ways that we are made to run. In large tubes in our skulls help us balance while we’re running, reflexes in our eyes keep our heads steady as we move up and down. It’s short arms and thin ankles that take us less effort to swing. Wide shoulders, a thin waist, and a pretty narrow pelvis help us counter the rotation of our moving legs. We have sweat glands, and less body hair, and tall thin bodies that let us disperse more heat. Better blood flow away from the brain to keep it cool, your big gluteus maximus muscles to stabilize our upper body, high surface area knee, ankle, and hip joints for shock absorption, and most importantly, our lower legs are built like rubber bands. This is by far our coolest running adaptation. Every time my body hits the ground, it delivers up to 8 times the force of my body weight. That’s over 1400 pounds! In order to keep that up for 26.2 miles, my foot expands and spreads like a shock absorber. This is the most important part of a running human: the Achilles tendon.

Though my foot hits the ground, my calf muscles flexed, but even then the muscles and tendons are still a little bit elastic, and then my ankle joint acts as a lever, which transfers as much as 50 percent of that energy into the next step. By using stored kinetic energy, instead of chemical energy, we’re able to go farther with less work. You can’t run a marathon with just rubber bands though. You need power that humans are run on gasoline your car ATP. This is an image of a striated muscle, the same type we have in our arms, in our legs, and basically everywhere that we move. Each row of stripes contains a string of proteins called actin, next to another string of proteins called myosin. And the head of that myosin protein, well, it acts like a ratchet, pulling along the string of actin, shortening our contracting the muscle. That myosin machine is powered by ATP. The thing is, our bodies only have a couple seconds worth of ATP stored up at any moment, so instead, we’re constantly replenishing it, thanks to our mitochondria and their little ATP factories.

Just picture me as a giant ship with trillions of mitochondria at the oars. My body cycled through something like 75 kilograms of ATP during the marathon. That’s almost my entire body weight! It just shows you how good our bodies are at recycling energy. Now that’s 75 kilograms of ATP broken down release the same amount of free energy as a kilogram of TNT. My body gets ATP in a couple of different ways. If I was running full speed the entire time, my cells would be forced to use an inefficient process called glycolysis, but by running slightly slower for the whole race, I let my mitochondria use a much more efficient method called the Krebs cycle and the electron transport chain. I can burn lots of fuel and make that ATP, like fat or protein, but my muscles prefer glucose, which is stored in long chains like glycogen for quick access, but even they don’t keep that much just lying around. So instead, I topped off my glycogen tank before the race by doing something called carb loading. Look at all these waffles I have to eat. But even eating all that before the race, my body can’t hold all the glycogen it needs to get through a marathon, so I had to eat and drink more during the race, or else I would hit the dreaded wall. Hitting the wall is just a big scary name for fatigue.

And there’s lots of reasons why it can happen. If you run out of glycogen, then your muscles can run out of ATP, and that protein ratchet will get stuck in the lock position. It’s actually why something, well, gets kinda stiff when it dies. If your cells don’t have enough salt, then your nerves and muscles won’t have the sodium, potassium, and calcium that they need to pass electrical signals. The main reason that people hit the wall is because of this. See, your brain is competing with your muscles for blood sugar, and if those levels dip too low, well, you’ll feel dizzy and loopy. “I think I’m gonna die. I’m gonna die. ” “You’ll be okay.” Your brain is actually preventing your muscles from firing goad for some emergency power save mode. I’ve never run a marathon before and I discovered it’s not like any other sporting event I’ve ever taken part in. You’re not battling an opponent; you’re only battling yourself. All those feelings of joy, and fatigue, and pain, they only exist in your mind. That mind is connected to the physical muscles and chemical power plants and proteins doing work.

I’ve never understood more about my body, or my biology, and when I push them to the limit, and in the process, I discovered that it wasn’t a limit after all. That was the most fun I’d never want to have again. Like halfway through, it was like the hardest thing I’ve ever done, and the entire second half was just pure willpower, like a competition against yourself, and I-I won. I beat- I beat my own mind. That was awesome. Thank you, everybody. We’re not the only social animals that sit down to eat together, but we are the only ones who cook. Cultural anthropologist Claude Levi-Strauss is above all cooking establishes the difference between animals and people, although I’d think he’d agree that pants make a big difference, too. 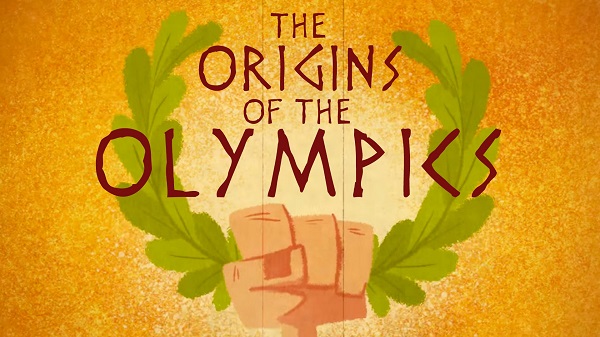 The Origin of Olympics The very purpose of the modern Olympic Games is to promote peace and unification or harmony within the international community through the medium of sports. The…