We all know that the earth is spinning on its axis, it takes 24 hours to complete one revolution and that is one day for us. One half of the earth faces the sun, makes it daytime while other half faces darkness makes it night-time. The Moon is also revolving around the earth. Moon can be seen only because it gets light from the Sun. We can see the moon at different times because it’s orbiting, can be seen sometimes in the night, sometimes in the day too. As moon orbits day by day, it swings around so that more of its lighted half is facing the daytime of the sun.

We know that the sun is the brightest object in the sky, which outshines every other article in the sky, during the day. And that is why we cannot see anything else, like stars or planets in the sky in day time.

In the evening, sun sets in and then, the moon rises in the night sky. In the night, the moon seems to be the brightest object in the sky. But, it is not as bright as sun.

We know that the Moon has no light of its own. (Do you know?) But then, how can we see the moon? This is because the sun’s rays fall on the moon and these rays are bounced off of the surface of the moon towards us, so that we are able to see the moon.

At night, except the moon, we can see other objects as well. What are these? These are planets, stars.

But have you ever seen the moon during the day? Think, have you?

You may not have noticed it, but, sometimes the moon can be seen during the day, too. In reality, the moon is hanging around in the sky all the time.

Look at the picture, you will see a pale moon alongside a beaming sun in the sky, that too, during the day! How is this possible? To understand this phenomenon, we have to study different phases of the moon at different times for a month.

The Moon is also travelling around the earth in a particular path and this trend of movement is called orbiting. The moon takes nearly 30 days to complete one orbit around the earth. Another interesting fact is that, the same side of the moon faces the earth, at all times.

In this picture we can see different positions of the moon at different times of a month.

Refer to the picture once more.

Sometimes it appears like a thin curved shape or just like your tip of your fingernail. In the 3rd and 7th position, the moon can be seen both during day and at night. But why? This is because in the picture you can see the lit up side of the moon is in such a position that it is facing both the day and night side of the earth, at the same time.

But, in the 4th, 5th, and 6th positions, the moon appears only at night. So at this period of time, the moon can be seen more at night time.

We can see the moon like a complete round shape only on full moon day. On other days of the month, we can see only some parts of the moon. The picture below illustrates the point clearly. 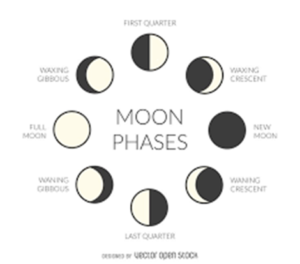 Another important thing is that, when the moon is on day- side of the earth, then, it is closer to the sun, and thus it receives and reflects more sunlight and appears brighter in the sky. This is also the reason why we can see the moon during the day time.

So now, I hope, the next time you see the moon on the day-sky, you will know why, and be able to explain it to your friends!