Why not green, yellow or any other colour? It may not look like it but do you know that the light of the sun contains all rainbow colours- VIBGYOR. When we mix all the colours of light we get white light. You can see the actual colours of light by using a prism. Rays of light leave the sun in a straight line but when it enters in the atmosphere of Earth and hits the tiny particles of air, the light rays scatter in the lots of directions and bounces around. Some colours scatter the more than others. Blue colour light bounces all over in the sky because it scatters the most.

On a clear sunny day, if you look at the sky, what do you see? You will see a beautiful blue sky over your head. You may sometimes wonder, what makes the sky blue or why does sky appear blue? To answer this, first we have to discuss the properties of light and atmosphere. Let’s start.

During the day, the sunlight illuminates our surroundings. In the evening we switch on the electric light, or, in some areas, people light up candles or lanterns. The light makes the world visible. But, do you know what the colour of light is? The light that we can see as sunlight, light from a torch or light from an electric bulb, are known as  white light. But do you know what light is made up of? Well, light consists of mainly seven different colours. In reality, the light that looks white to our eyes are made up of all the colours of the rainbow  namely – violet, indigo, blue, green, yellow, orange, and red. In short, VIBGYOR. But we can see the light only as white in colour. Normally we cannot see the other colours except in some special circumstances.

Sometimes, on a cloudy or rainy day, you may have been amazed with the splendid appearance of a rainbow in the sky. You can see almost all the seven colours in a rainbow. In fact VIBGYOR is the colour of rainbow. How does this happen? When sunlight falls on water droplets in the sky it is separated out or split into the seven different colours. Again, the question arises, why?

Let’s start with an experiment by a prism.  The picture below is that  of a prism. 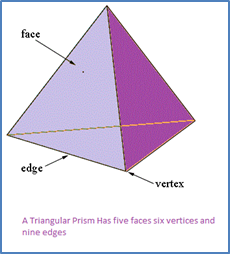 About 300 years ago, great scientist Isaac Newton, proved with the help of a prism that, white light, which we see from different sources of light, is composed of seven colours. In his experiment, Newton showed that when white light passes through a prism, as shown in the picture, the seven colours split up when emerging from the other side of the prism. As shown in the picture below, a prism breaks up the white light into a spectrum of colours.

Another fascinating feature of the colour of light is that, each colour is like a distinct light wave and each colour has a different wavelength. You may get an idea from the picture below, 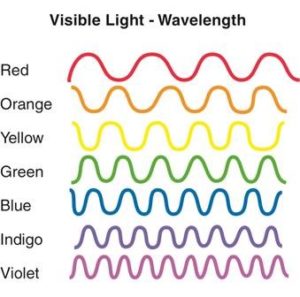 In the picture, it has been clearly shown that red colour has longest wavelength and violet has shortest wavelength. The wavelengths of other colours are in between these two colours.

Another important property of the different colours is that, colours with shorter wavelengths, when passing through one medium to another medium, bend more and hence, scatter more.

Now the question is, why does sky appear blue? The answer depends on the following factors:

First, let us discuss the nature of atmosphere. We know that our earth is surrounded by the atmosphere. It consists of layers of gases, generally called air. It also has dust particles, water vapour and many other particles roaming in the atmosphere.

Now the interesting thing is that, how much the light waves will be scattered by the particles strongly depends on the size of particles, as well as size of the wavelength of the colour. The particles do not cause much obstruction for the red, orange, yellow and green colour, because their wavelength is not fit to be hit by the particles present in the atmosphere. These colours scatter least and most of the red, yellow, orange and green colour pass through the atmosphere together and reach us. As these colours stick together and reach us, they still come to our eyes as white or yellowish. Now, the remaining colours, blue and green have shorter wavelengths and their wavelengths are of the right size to be hit and scattered by the particles, mainly by the gaseous particles, present in the atmosphere. Thus the blue and violet colours are separated out from the other colours and scatter in the atmosphere in all directions. And this phenomenon of scattered blue colour is what makes the sky appear to be blue. But what happens to the violet colour?

As the sunrays travel a longer distance at the time of sunset or sunrise, the sunrays are hit by more and more particles in the atmosphere. As a result, the yellow colour along with green and violet colours scatter away, thus allowing red and orange colour to pass through the atmosphere, as they have a longer wavelength.  As red colour is of longest wavelength, it scatters least and reaches our eyes. That is why at the time of sunset and sunrise, the sun as well as sky appears to be red. 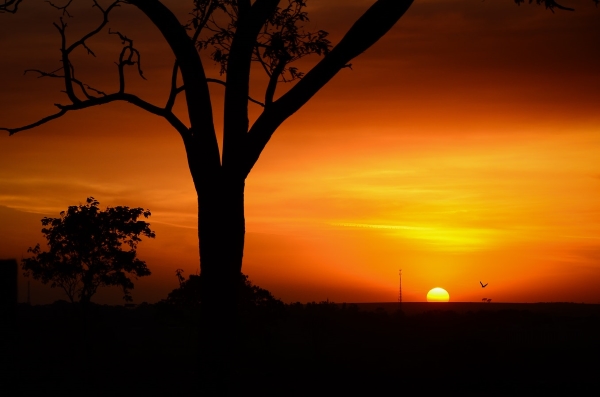 How do we see things? Sun looks red during sunset. Why? We can’t see anything in a dark room but as soon as we open lights we…