As Anatole France has rightly said, “A dictionary is merely the universe arranged in an alphabetical order.” It is a book that is meant to hold in itself every word in a given language and enlist them alphabetically along with their meanings for the sake of our efficiency. Granted, since it’s a big, fat book it can be difficult to navigate for young kids. But if taught properly, a dictionary, with its brilliant design, can become easy to use for anyone. That is where this set of interactive worksheets come into play. All you need to do is hand out these printouts to your kids and tell them how to solve each activity. And by the end of it all, they are sure to become big fans of the handy little guide that a dictionary is.

This is the first set of worksheets in a series of three which requires your child to arrange the given words in alphabetical order based on their first letter. A dictionary sorts out words based on how they are spelled, so no brownie points for guessing that the first letter of the first word of every dictionary is an ‘A’.  This process gives a structure to the positioning of words in a dictionary and also makes for an efficient system of searching for the words one needs.

These worksheets need you to put this feature of a dictionary to use and grab the one you use to solve the questions above. Flip through the pages and figure out which word comes before which one, and write the words in that order. A solved example is given for your convenience. In that example, the word ‘Father comes before ‘Grandfather’ which is followed by ‘Mother’, then ‘Nephew’, then ‘Sister’, then ‘Uncle’ as the letter ‘F‘ comes before ‘G‘ which comes before ‘M‘, ‘N‘, ‘S‘ and ‘U‘, in that particular order. 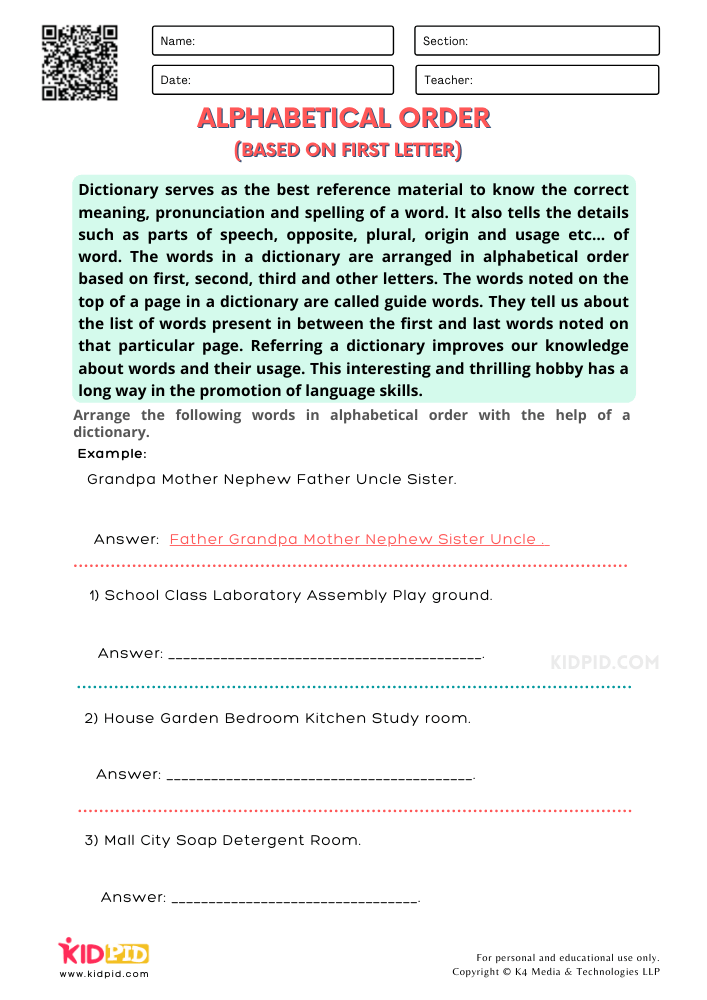 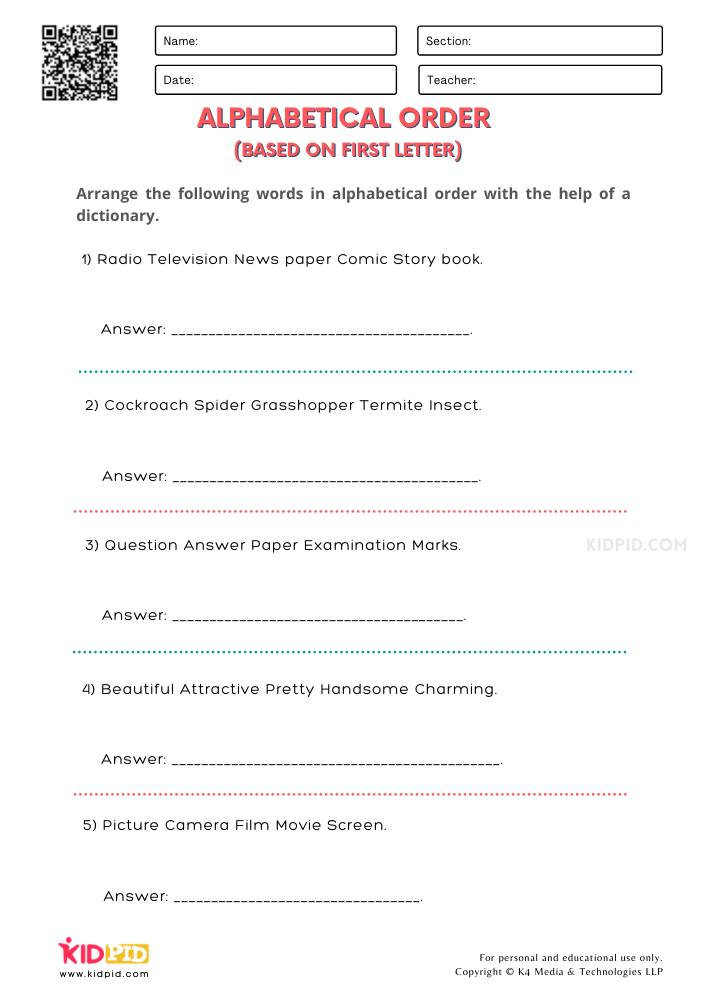 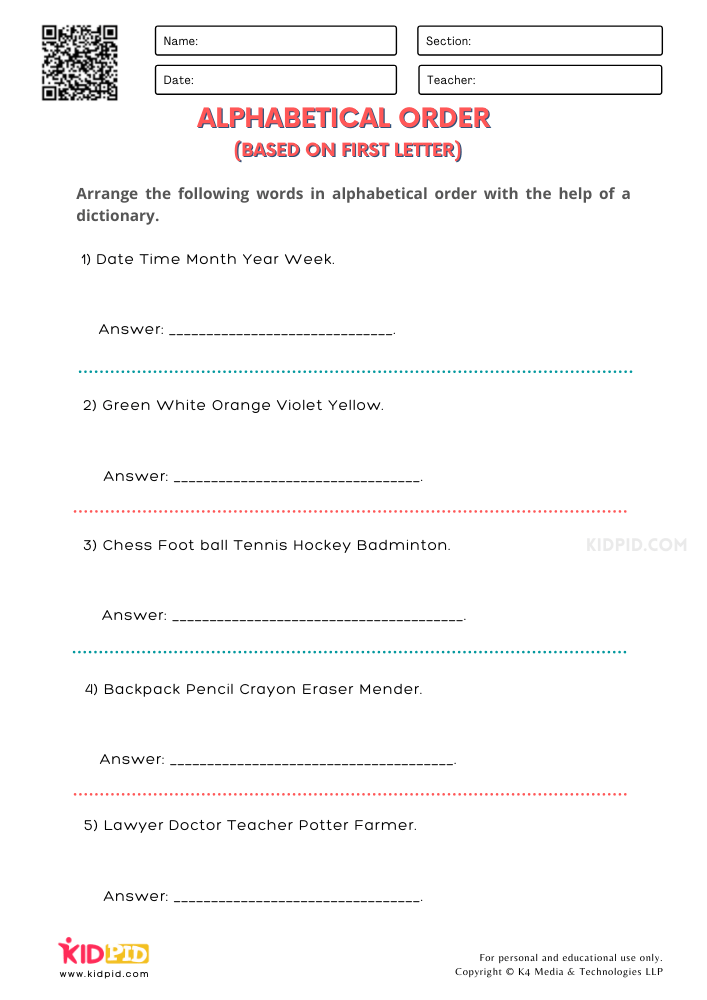 A dictionary isn’t just a random collection of words arranged in alphabetical order. It gives us more information than that, like the meaning of the word, how to pronounce it, and of course, its spelling.  While just googling seems like a good way to get to know specific spelling fast and easily, it’s not a solution that will help engrave the spelling in a kid’s mind and thus will not yield any long-term result.  The best way to master spelling is to go through them from time to time, perhaps read books and watch shows or cartoons with subtitles. But the most effective way is to just flip through a dictionary, letting the young mind come in contact with and absorb all the new words it comes across.

In this set of four worksheets, there are four words written side by side, but one of them is spelled incorrectly. It is the student’s goal to try to identify the word and write it with its correct spelling in the blank provided on the right-hand side. Guide your kids through how to use a dictionary and check for spellings in them in order to complete the following exercise. 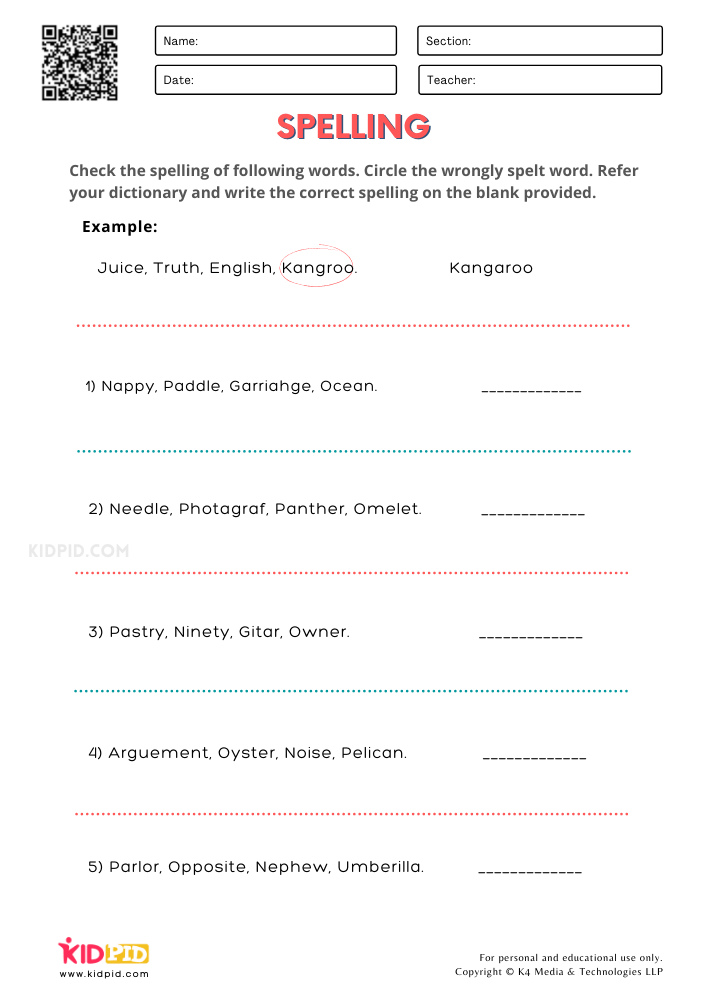 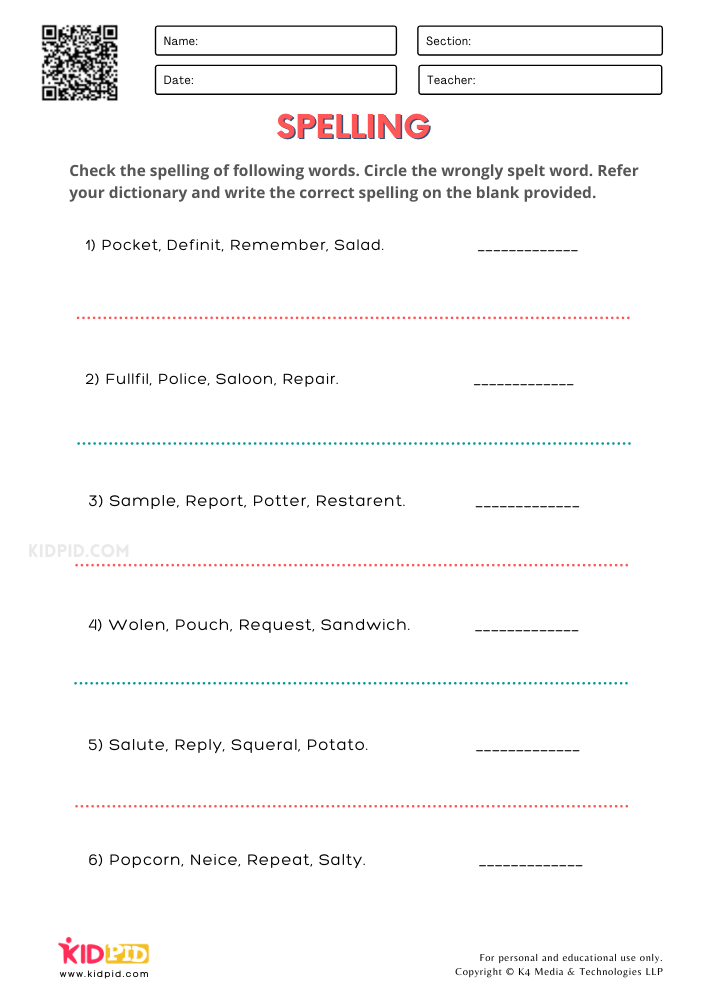 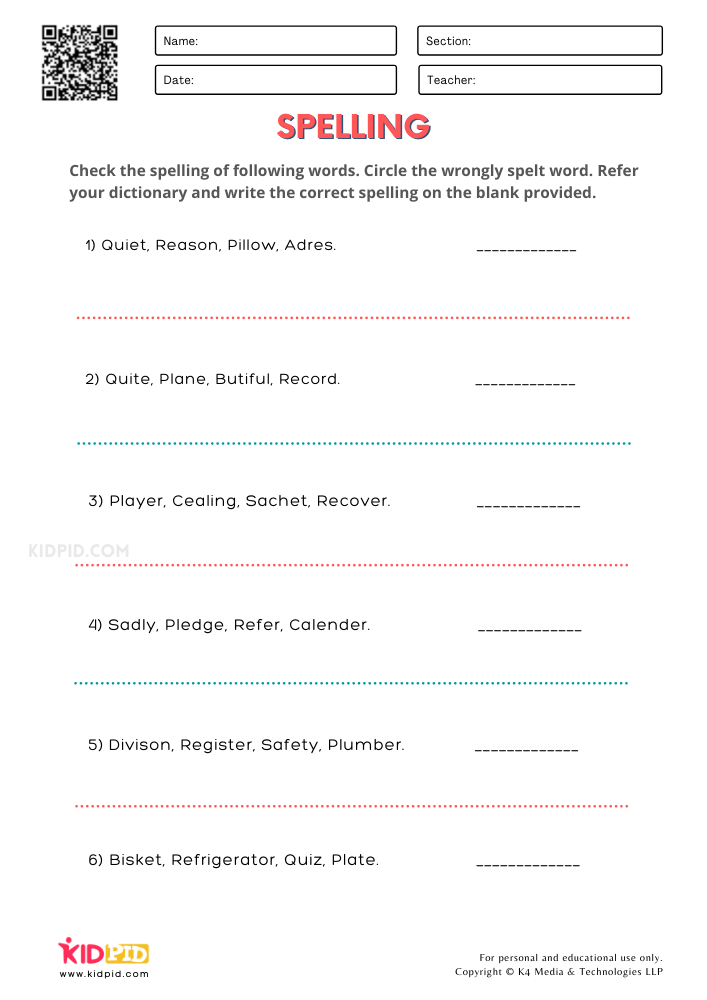 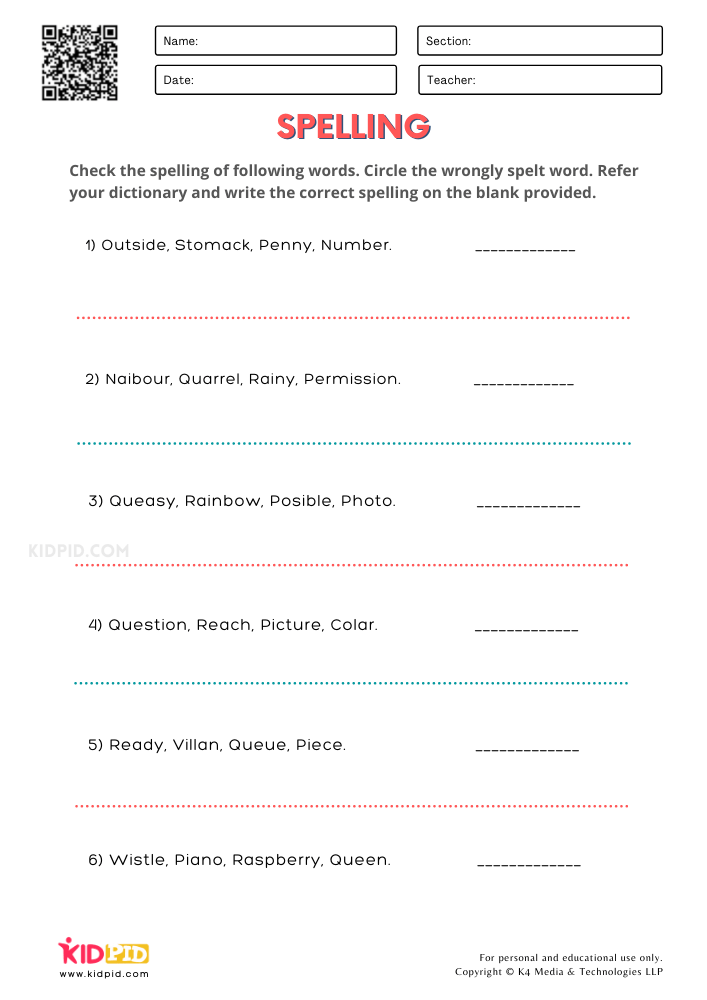 A dictionary is a massive collection of words along with their definitions. It goes without saying that it is neither practical nor important to print every frequently used word in its full form all the time. So most dictionaries resort to the use of standardized abbreviations.  The most common reason to use abbreviations is to indicate which part of speech the word belongs to. In order to use a dictionary effectively, it is essential for one to be familiar with the common words and their corresponding abbreviations.

After you print out these worksheets, your toddler will get some good practice in the department in the form of a fun match for the following activity. They are supposed to pick an abbreviated word in Column A and connect it to its correct full form given in Column B.

The second worksheet doesn’t deal only with parts of speech. It includes words and abbreviations meant to connote which geographical area a word is used in. For example, in Indian English, ‘French fries’ and ‘Chips’ are two different things. ‘French fries are potatoes cut in long and deep-fried till it has a golden exterior and soft interior.  ‘Chips’ on the other hand are thinly sliced potatoes, deep-fried until they are crunchy. Whereas in British English, both these definitions quality as ‘Chips’ and in North American English both these definitions qualify as ‘Fries’. Thus, it is important to distinguish them in a dictionary that caters to the whole globe. But the way to solve the second worksheet remains the same as the first one. 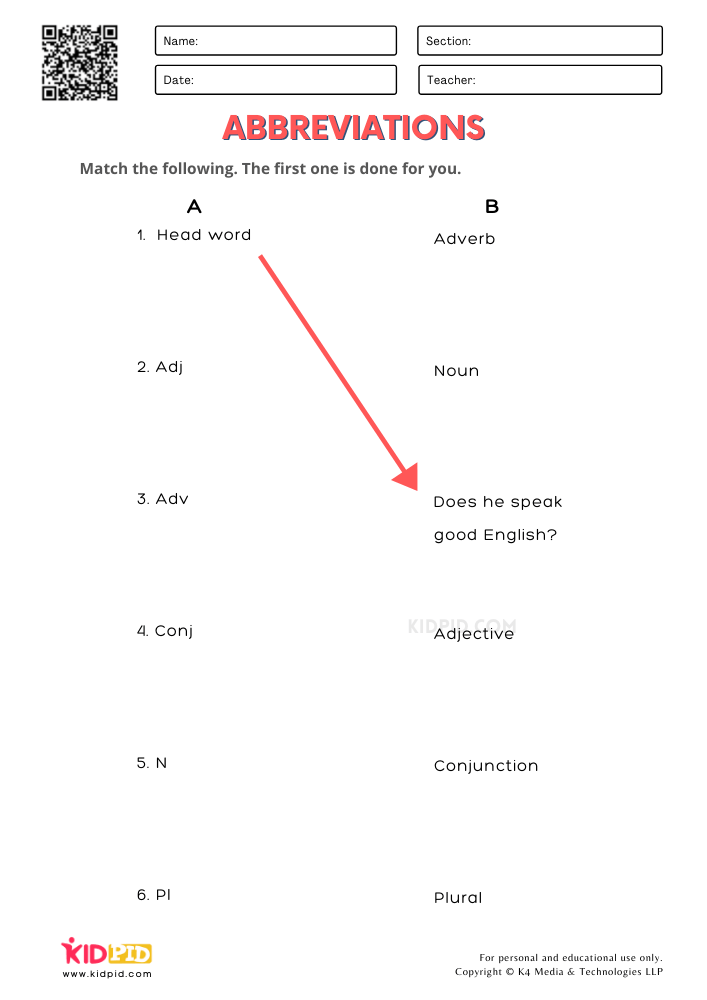 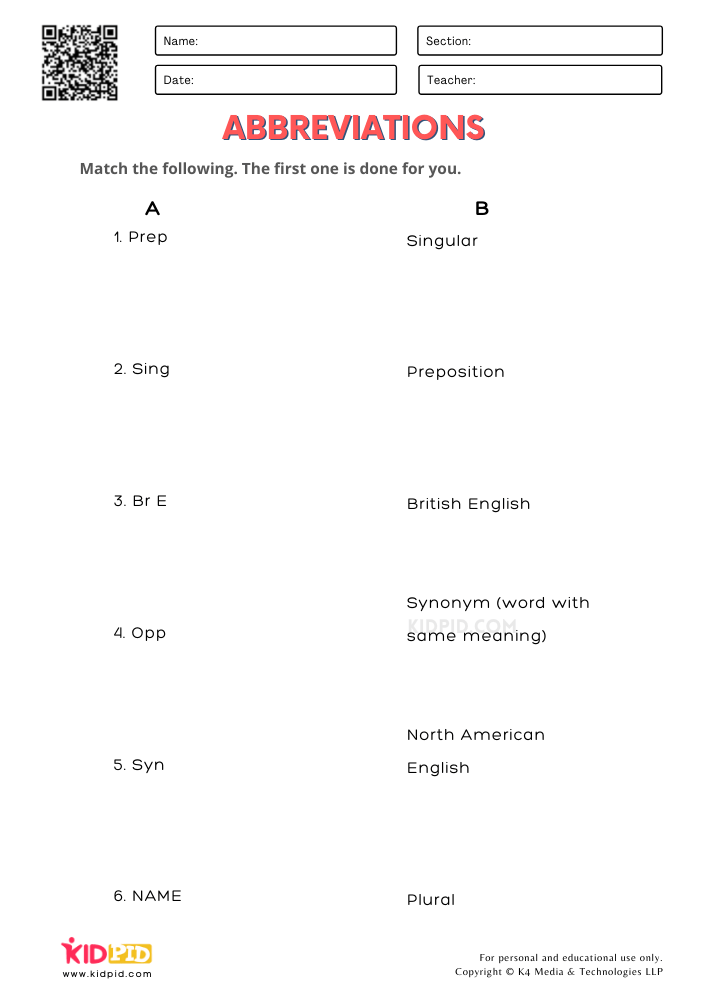 A mentioned before, dictionaries arrange their words in alphabetic order. But among the hundreds of words that have ‘A’ as their first letter, how is it decided which words will take precedence over others? That is decided by taking into account the second letter of every word. And in case there is a tie there too, they move on to the third letter. And so on and so forth until they find a letter that isn’t placed in exactly the same place in two or more words. Then that letter becomes the deciding factor for where the word will appear in the dictionary.

These worksheets require the kids to arrange the given words in alphabetical order, like in the very first worksheet. But there is a catch. All the words are given below start with the same two letters, therefore they have to depend on the third letter to sort out the order of the words in the A to Z format. As shown in the first example, you have to number the words in order of their appearance in a standard dictionary. 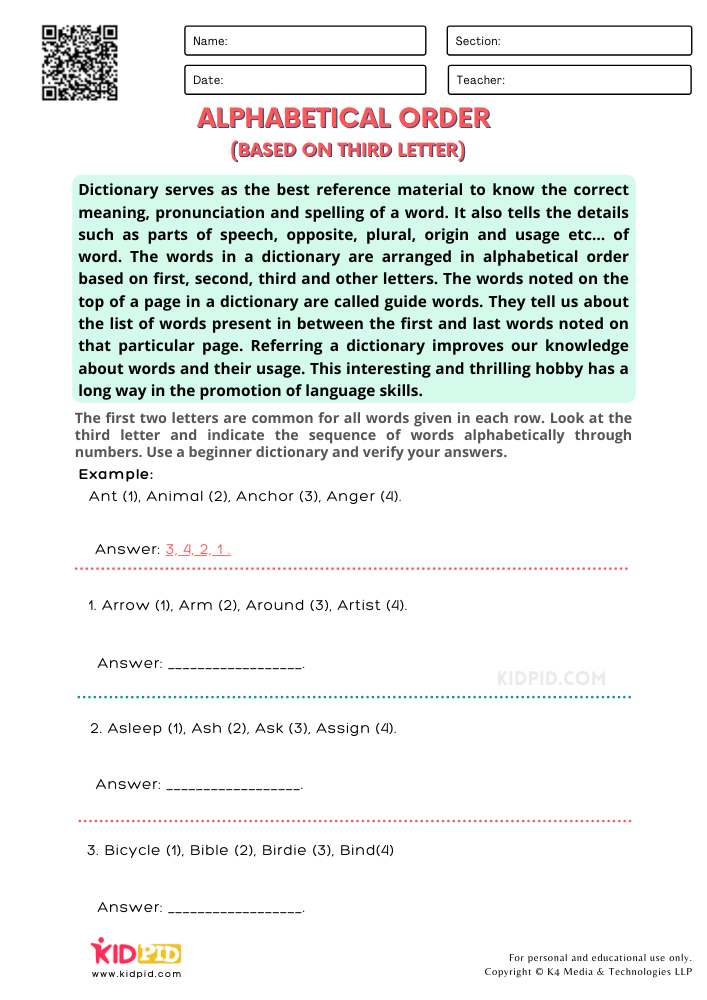 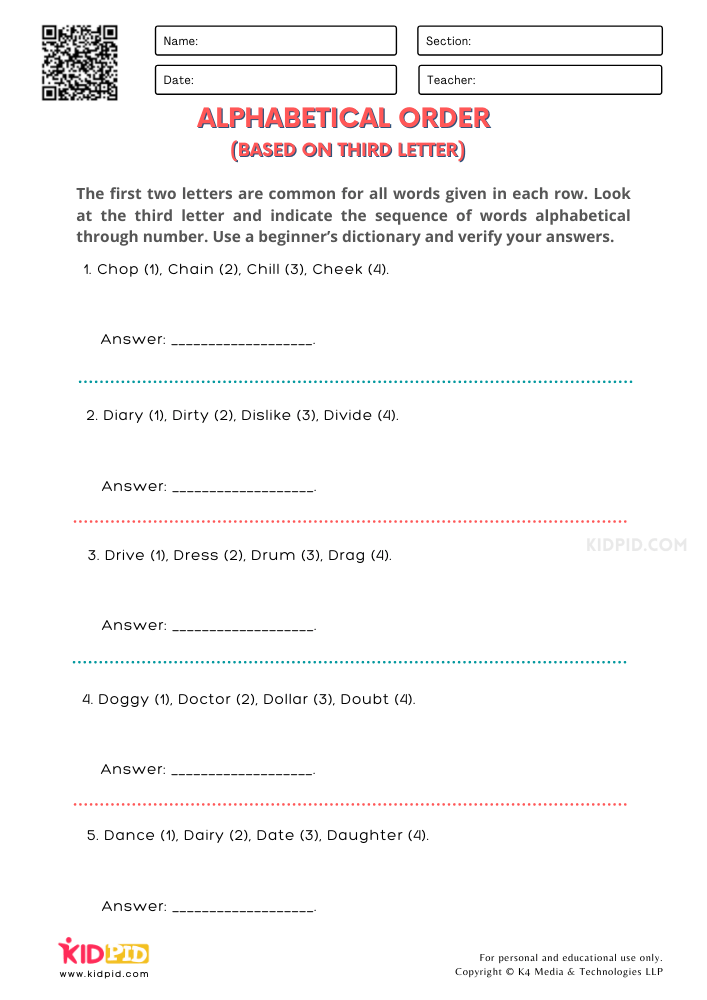 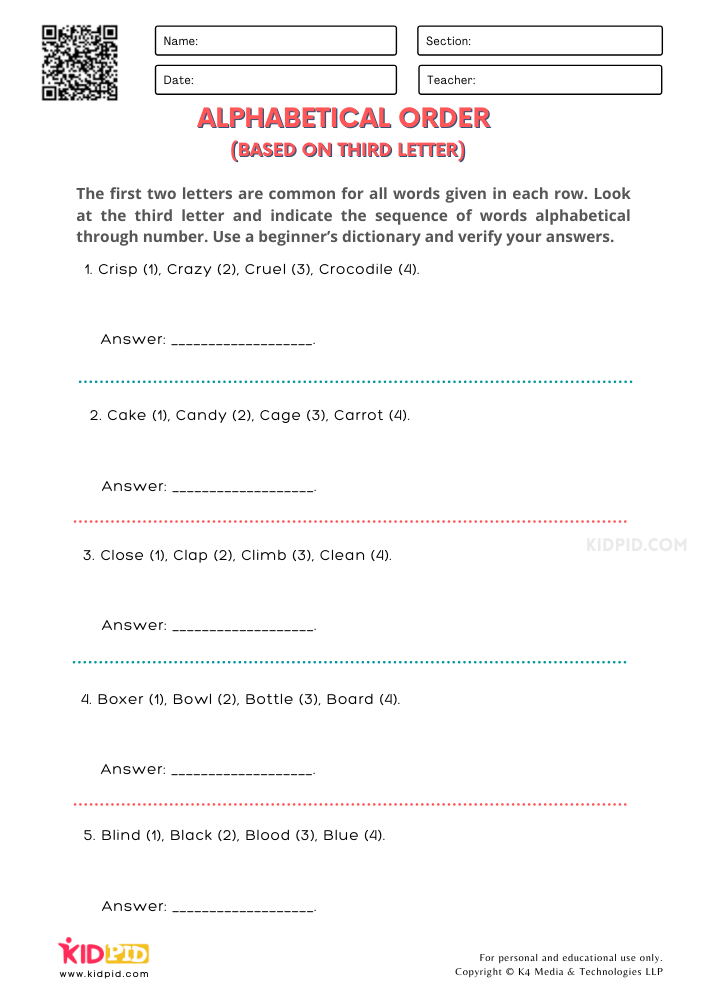 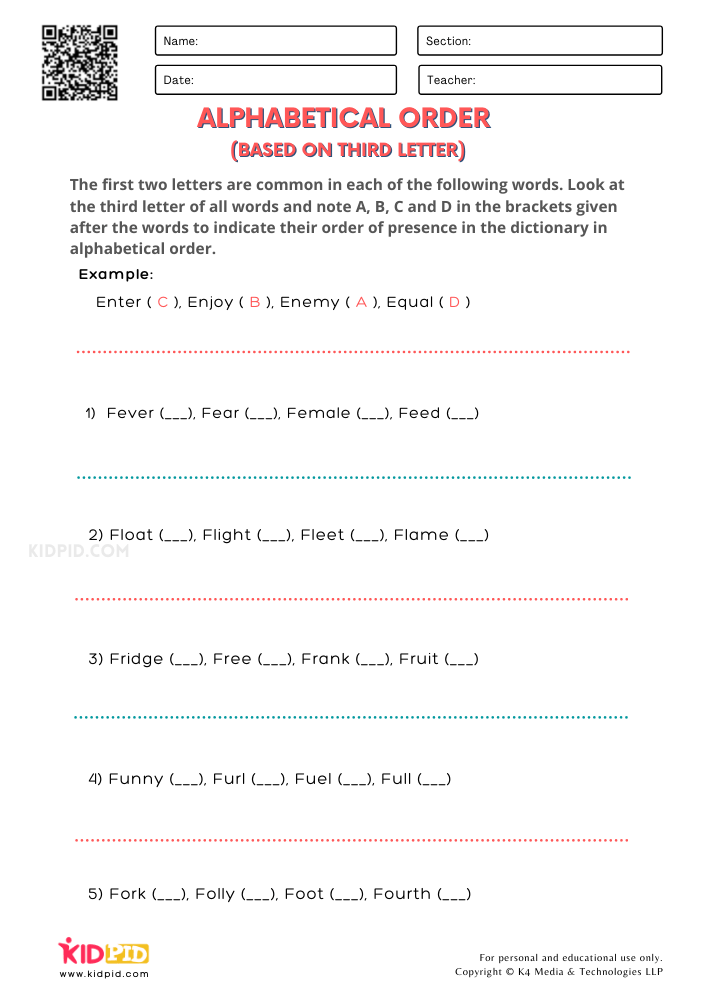 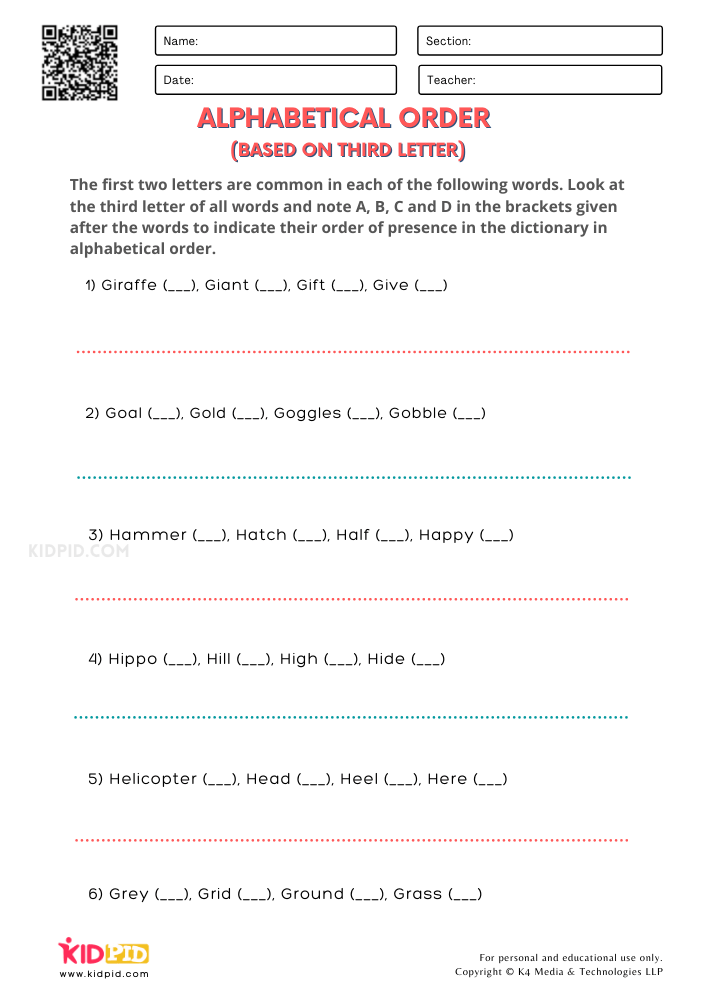 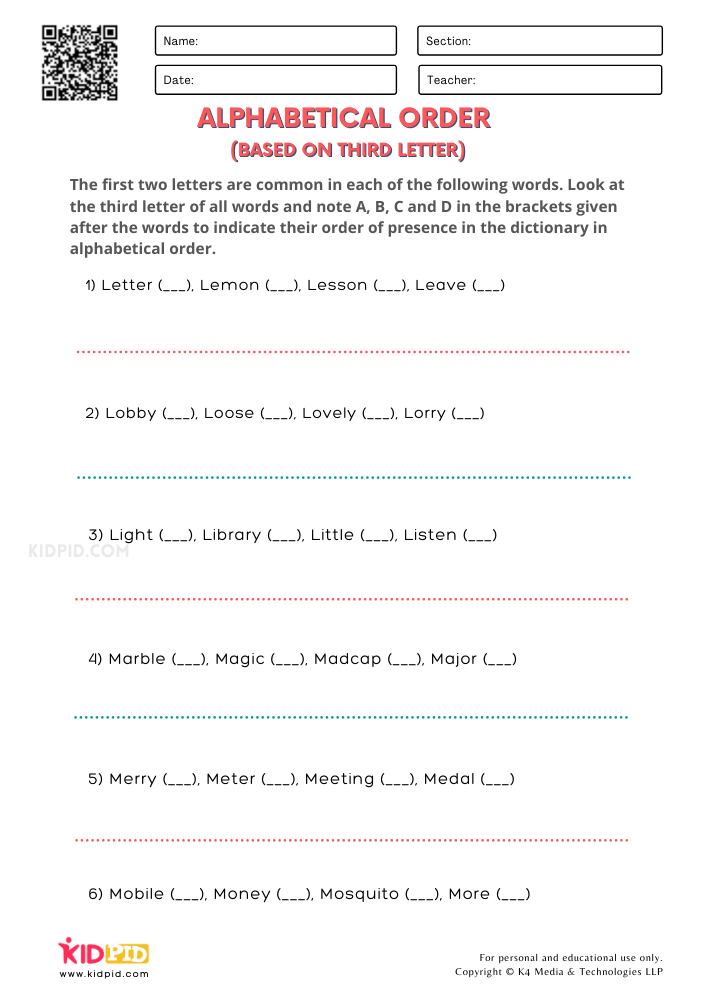 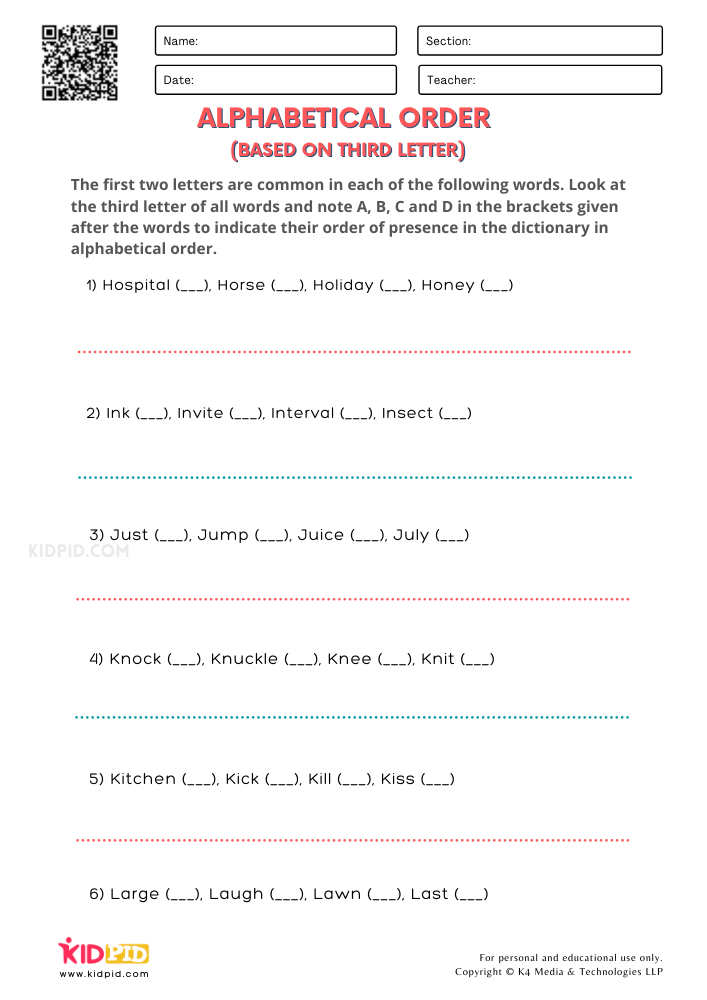 This set of worksheets also require your toddler to arrange the given words in alphabetical order but all the words start with the same letter. So the arrangement has to be done based on the second letter of each word and rewritten in the appropriate order in the blank spaces provided below. After the student is done, check the answers using the elementary dictionary. 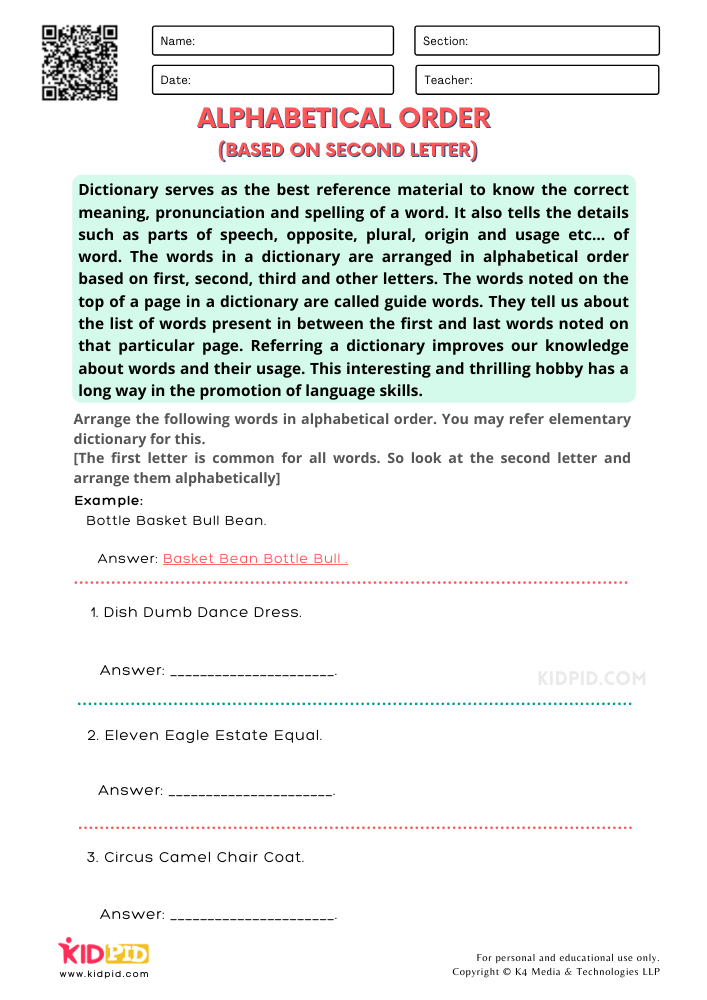 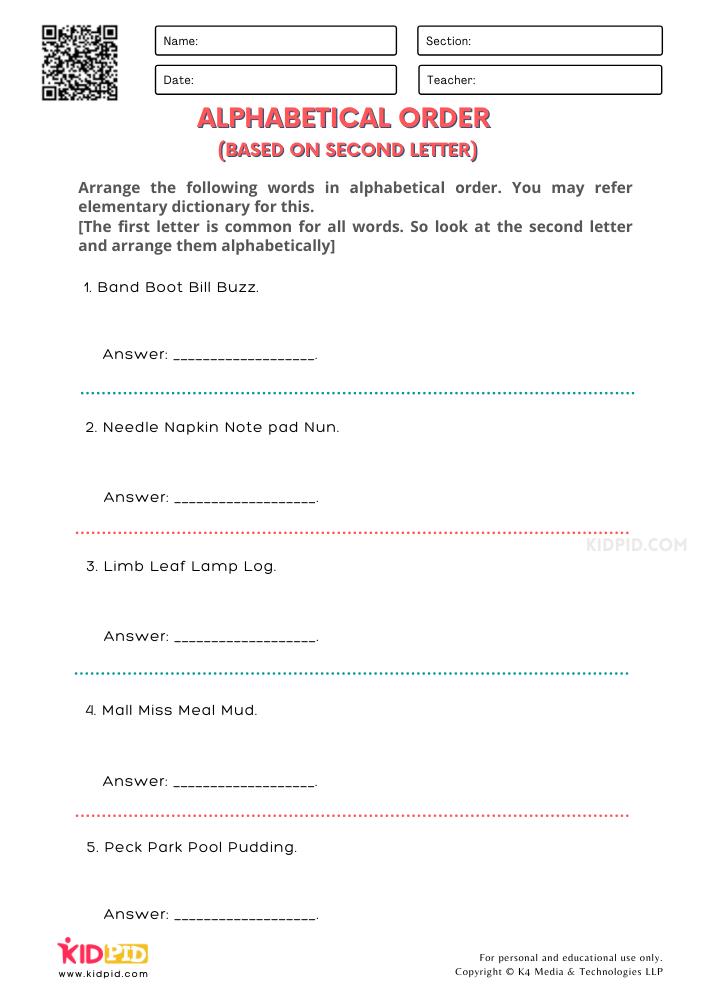 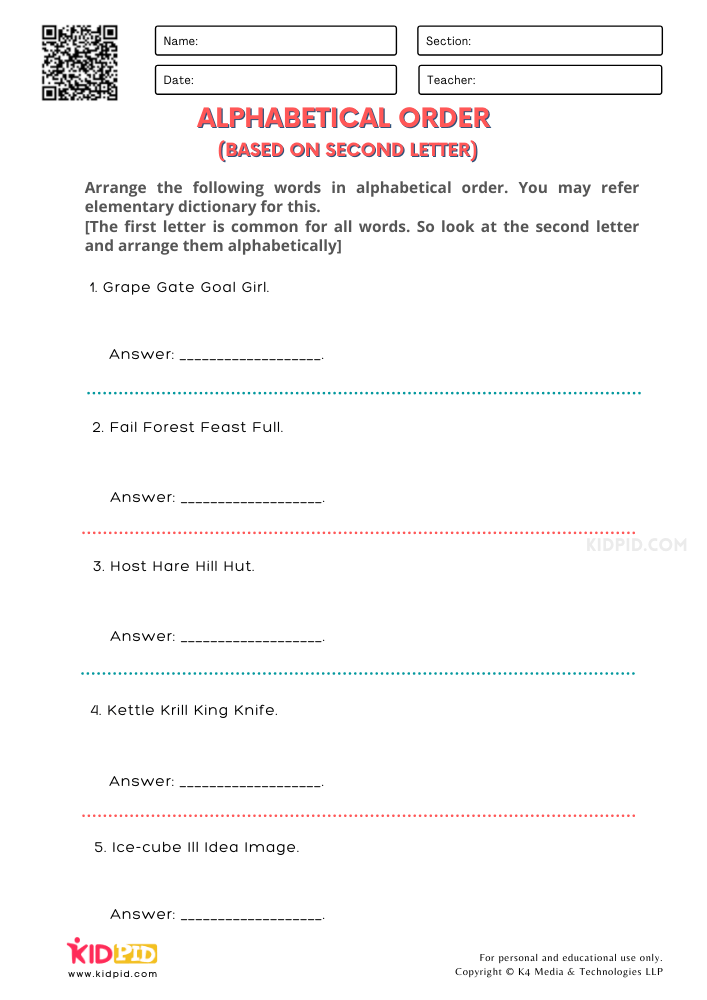 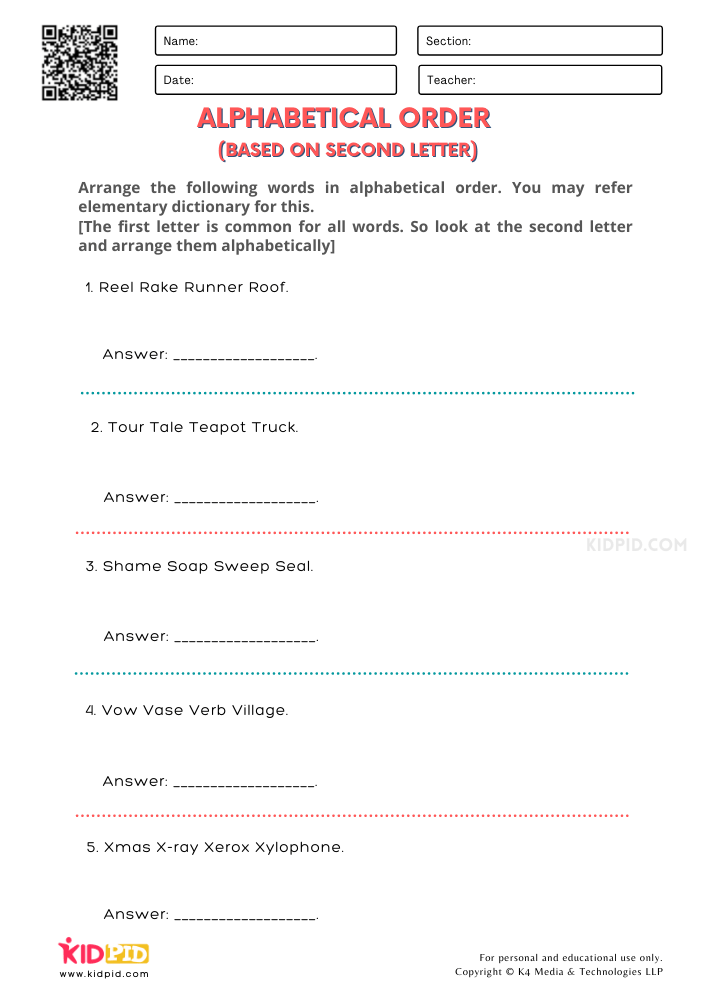 After being done with these worksheets, your kid will learn how to use a dictionary effectively and with this much practice, he or she will also decrease the time it takes them to hunt out words from there. While solving these activities they will also come across a bunch of new words, their meanings, spellings, and pronunciation. That will increase their vocabulary and improve their reading and creative writing skills.

So get these printable worksheets in your child’s hand as fast as possible and take their knowledge of English to the next level, all completely free of cost!