The first step of learning a new language is to get a good grip on its basic grammar. But to learn a language means being able to peep outside textbooks and have smooth conversations with other speakers of that language. Every figure of speech plays an important role in your child reaching that stage.  Pronouns are one such figure of speech. Pronouns are words that are used as substitutes or nouns or noun phrases. The use of pronouns can be used to add flair to sentences and avoid repeating the same noun over and over again. The given worksheets will teach your child the concept of personal pronouns and how to work them into regular conversations. 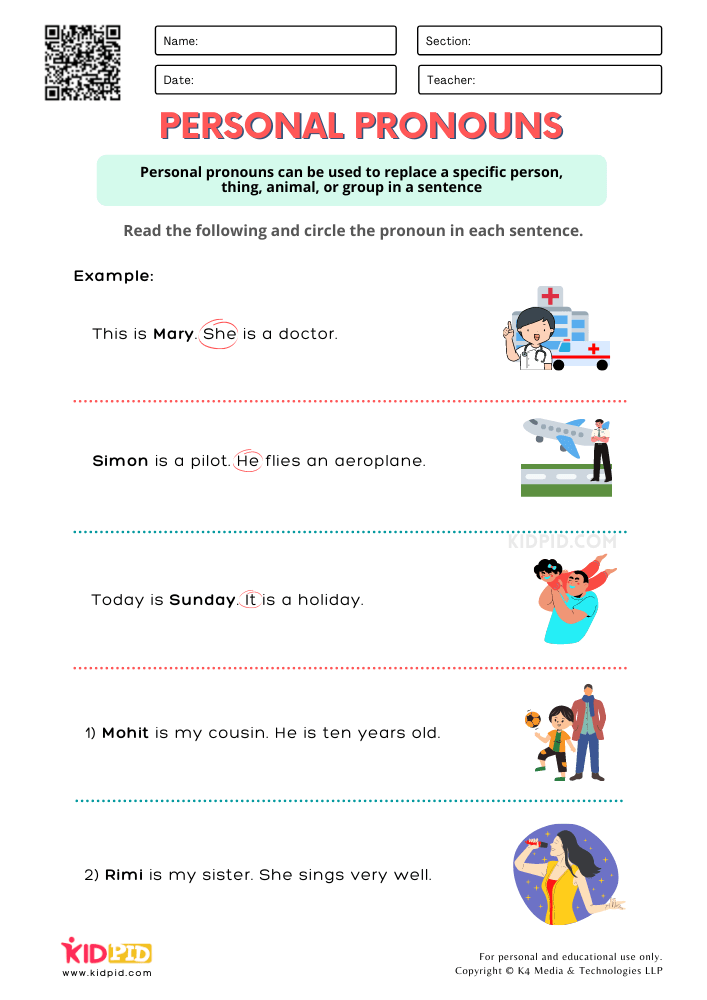 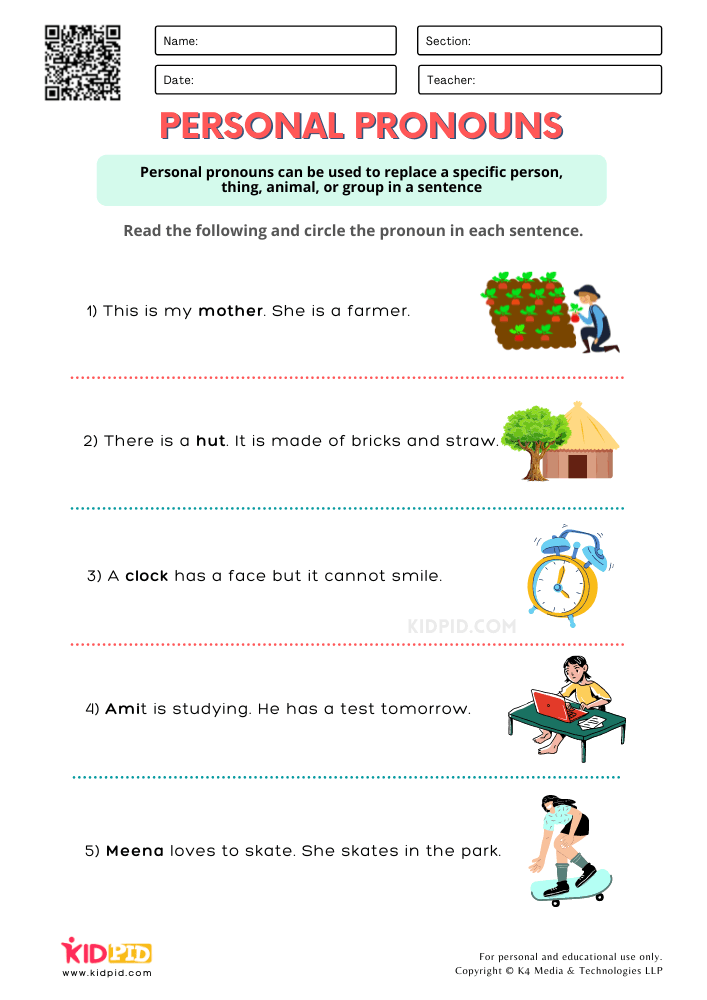 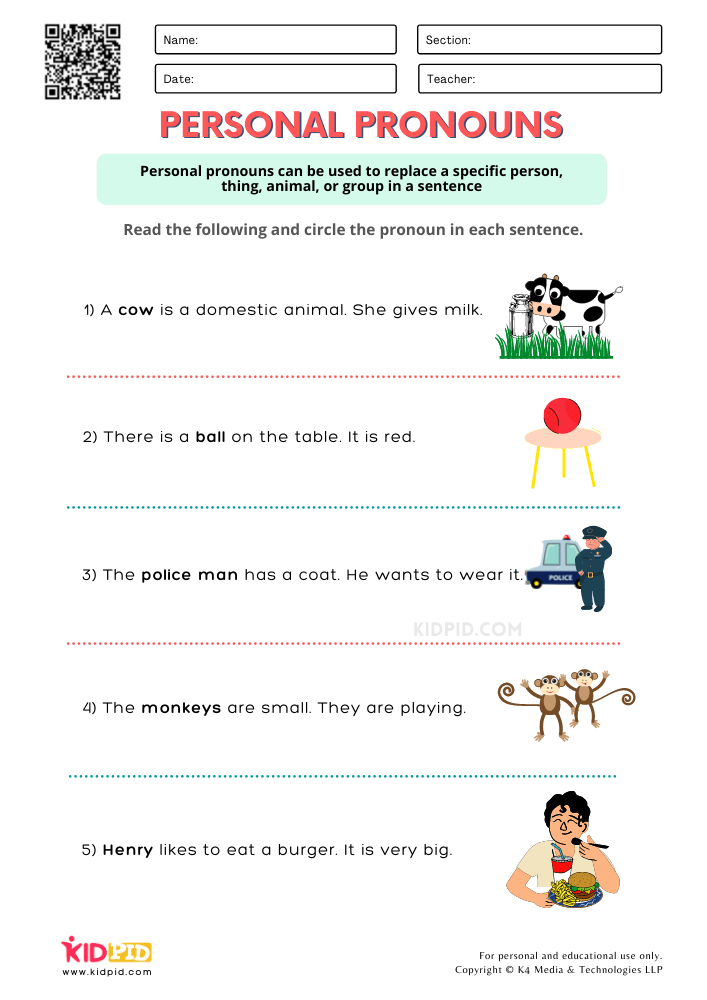 After having learnt the basics and practicing it sufficiently, the child should move on to the next level. In the following worksheets, the child will learn to not only identify the personal pronoun but also differentiate them depending on if they are plural or singular.

Singular pronouns are pronouns that are used to replace a singular noun in a sentence.  Eg : Monica is cooking. She is a chef. “She” here refers to only one person, i.e. Monica.

Plural pronouns are pronouns that are used to replace the plural form of a noun  or club two or more singular nouns together in a sentence. Eg : Diya and Maya are twin sisters. They were born just a few minutes apart.  “They” in the second sentence refers to a collection of both the people (nouns) mentioned in the first sentence. 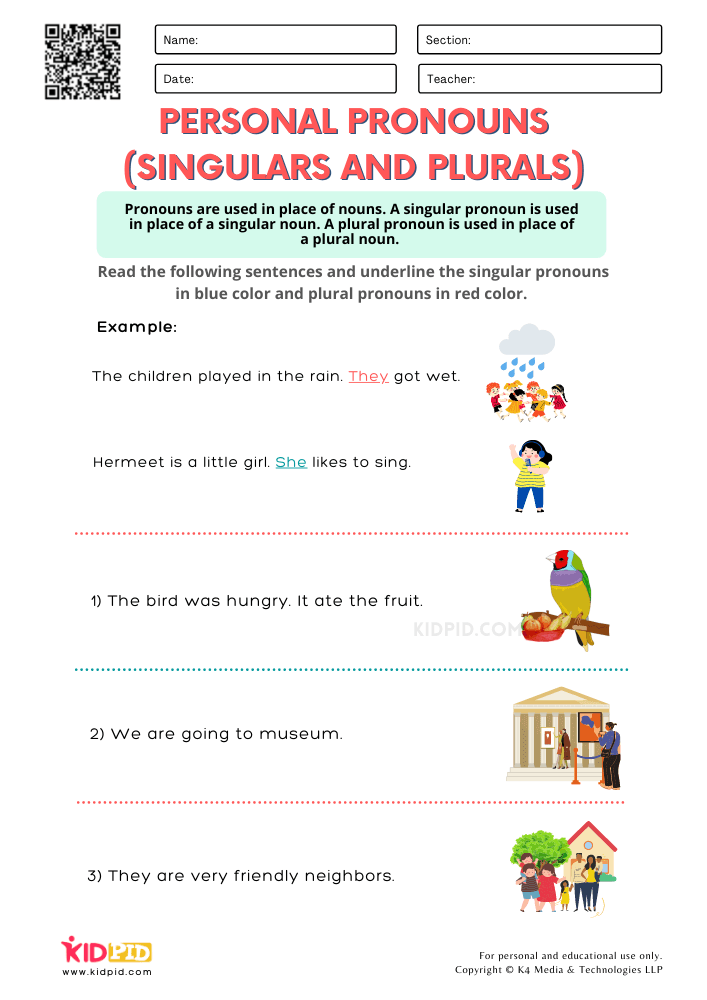 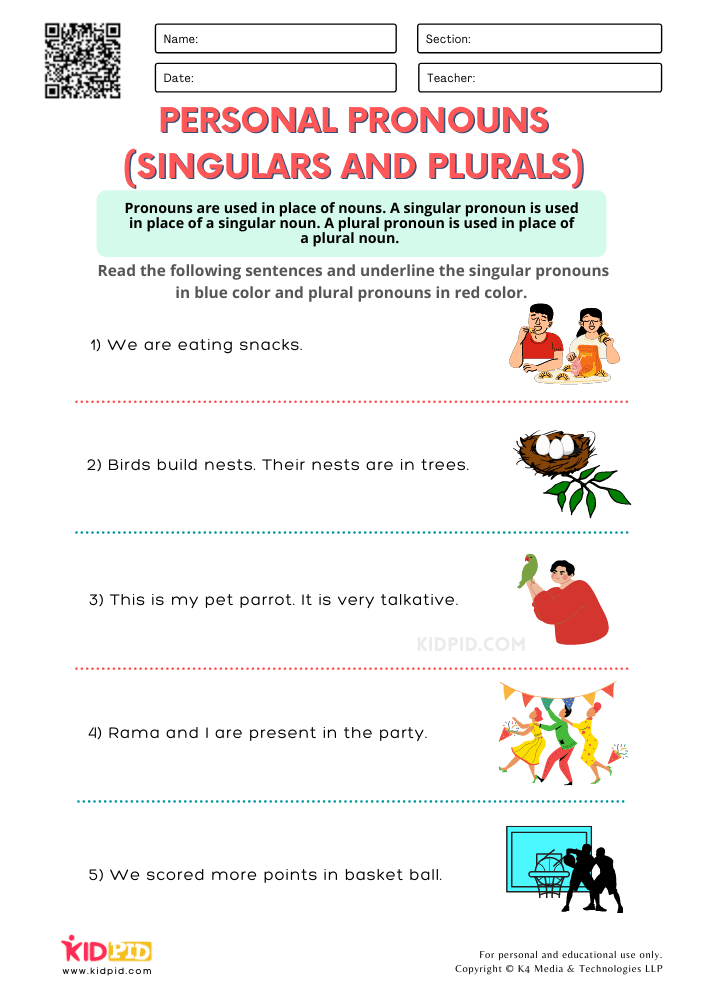 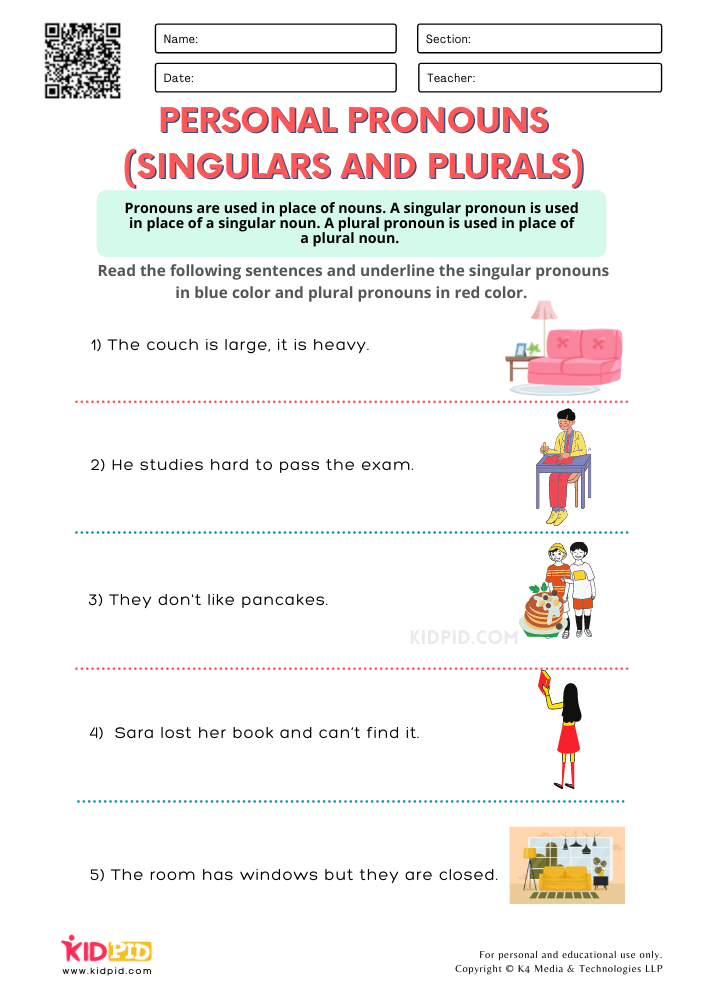 The graphics can help prevent study time from turning into the tiresome act of solving a set of questions.  Match the following is always a favorite exercise among kids as it males learning fun and feel like playing a game. It makes the child relate better to the given sentence, spark their imagination and force them to think of the answer in a real world setting. The last two worksheets explain personal pronouns to your child once again before they are done with this bout of practice. The kids have to draw a line from the picture to the sentence that describes it the most aptly. Before drawing the lines, ask you kids to consider how many people are there in a given picture and what is their gender. 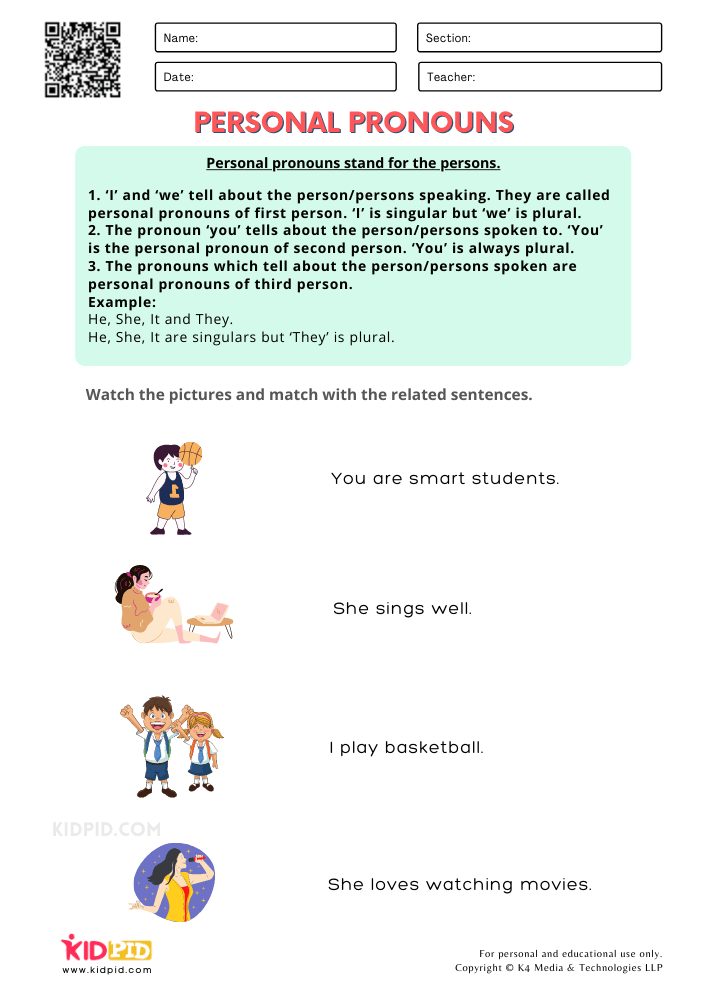 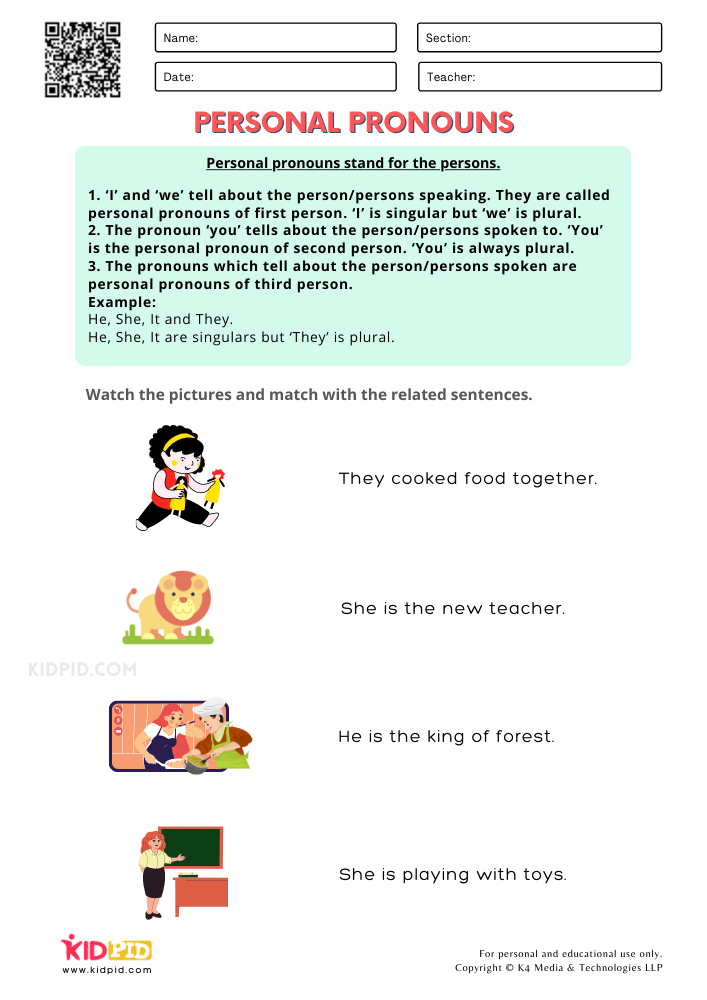 These worksheets are all enriched with activities and styled differently so that kid’s brains are stimulated to learn in every way possible. All you need to do is download and print them so that your child can learn the topic and also revise it in the future.