Rainbows are one of the most beautiful parts of nature. A Rainbow is a colorful arc that forms when the rays of sunlight strike through the raindrops. This beautiful combination ends up forming a magical arc that contains seven colors, these colors are in the form of VIBGYOR(violet, indigo, blue, green, yellow, orange, red). This pattern of colors starts with red and ends with violet.

How Do Rainbows Form? 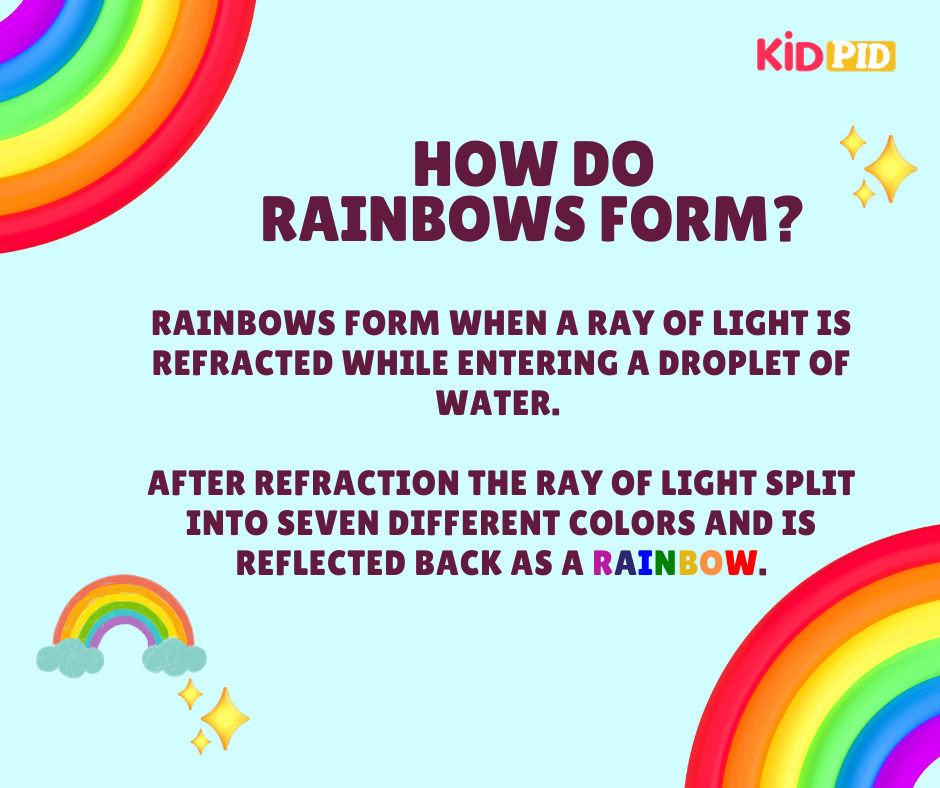 Rainbows form when a ray of light is refracted while entering a droplet of water, after refraction the ray of light split into seven different colors and is reflected back as a rainbow. Rainbows actually form in a circular shape, we can’t see the circle as the bottom is hidden in the ground. But from the sky, with the help of airplanes and helicopters, we can easily see the circular shape of the rainbow opposite the sun.

Mostly rainbows appeared after heavy storms, in some countries rainbows are the symbol of peace.

According to famous scientist Issac Newton, the rays of sunlight consist of the colors present in the rainbow, when these colors are mixed together, They form a white light and when this white light hit the droplets of rain the white light split into seven different colors which cause in the formation of a rainbow. This process is known as dispersion. White light is the light that we see in our day-to-day life.

People see rainbows differently as it forms by the light shining through the droplets, the visibility of a rainbow depends on the angle and the position of the viewer. Hence it may seem different to different people’s visions. We can also create an unnatural rainbow by spraying water droplets in the air on a very sunny day.

Some of the interesting facts about rainbows and clouds