How Computers Work?: What happen inside a computer when I press a keyboard button or click a mouse?

Do you know what is mouse?

It’s not a rat that you might see in your home. Mouse is an input device. It is also called the pointing device. It look like a mouse that is why it is called mouse. 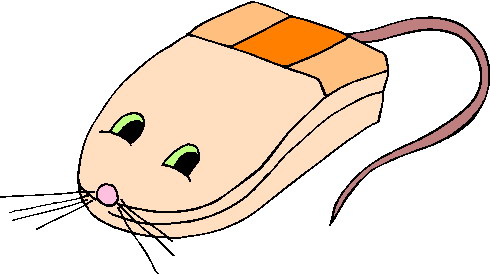 It is used to point to the items present on the computer screen. It has two or three buttons on top and a sensor at the button. A long wire attaches the mouse to the CPU. Nowadays wireless mouse is also available.

What does the mouse consist of?

A mouse has left button, right button and a central scroll wheel.

Friends, do you know that there is a correct way to hold the mouse?

By following these steps you’ll be able to use the mouse much better.

Do you know what clicking means on a computer?

A computer mouse is used by pressing its buttons. Pressing buttons of the mouse is called clicking. Clicking means to press and release the mouse button once.

Clicking can be done in two ways:

What is a mouse pointer?

The small moving arrow on the screen is called mouse pointer or cursor. The cursor will move in the same direction on the screen as you move the mouse on the table.

Do you know who invented the computer mouse?

The computer mouse was invented by a scientist called Douglas Engelbart. He made the first mouse by using a piece of wood. (How?)

A keyboard is a device which is used for typing in the computer. It contains many buttons on it which are called keys.

Do you know how many buttons are there on a standard keyboard?

There are 104 keys on a standard keyboard.

How Computers Work : What happen inside a computer when I click a mouse or press a key from the keyboard?

If you took your mouse apart, you will see that it is a very simple machine. It has a couple buttons and a system for detecting motion and distance. When you click a button of your mouse, it sends message to the computer with information about its position. When your mouse click is received, it’s handled by the basic subsystem.

This subsystem acts like the eyes and ears and mouth and hands of the computer.

Basically, it provides a way for the computer to interact with its environment. Similar is in the case when you press a key from the keyboard.

The CPU, or the Central Processing Unit is called the brain of the computer. Just like your brain does not take your whole body, the CPU doesn’t take up the whole computer, but it runs the show all the same. When the CPU comes to know that you have clicked the mouse or pressed the key from the keyboard, the generates an interrupt and works according to the click performed by the user i.e. the left click, right click or scroll or works according to the keys pressed from the keyboard by the user.

Also check our other amazing articles on Computers

How to Introduce Computers to Your Children

All About Internet for Kids