English is a global language. It is the official language of several countries. To gain proficiency in the language of English is no easy feat. But as with everything in this world, it is attainable through enough practice. Speaking and writing in English correctly requires a firm grasp of the concepts of grammar.

The following worksheet consists of exercises related to one of the eight parts of speech in the English language; the noun.

The part of speech indicates how a word functions in meaning as well as grammatically correct within a sentence. The noun is one of the eight parts of speech in the English language.

A noun is defined as a word that names something, such as a person, place, thing, or idea. In simple terms, a noun is a word that refers to someone, somewhere, or something. It functions as the name of a specific object or set of objects such as places, creatures, objects,  etc.

There are 10 different worksheets with three questions each. The worksheet is relatively easy to solve. If the child is unable to do the task at hand guide him. 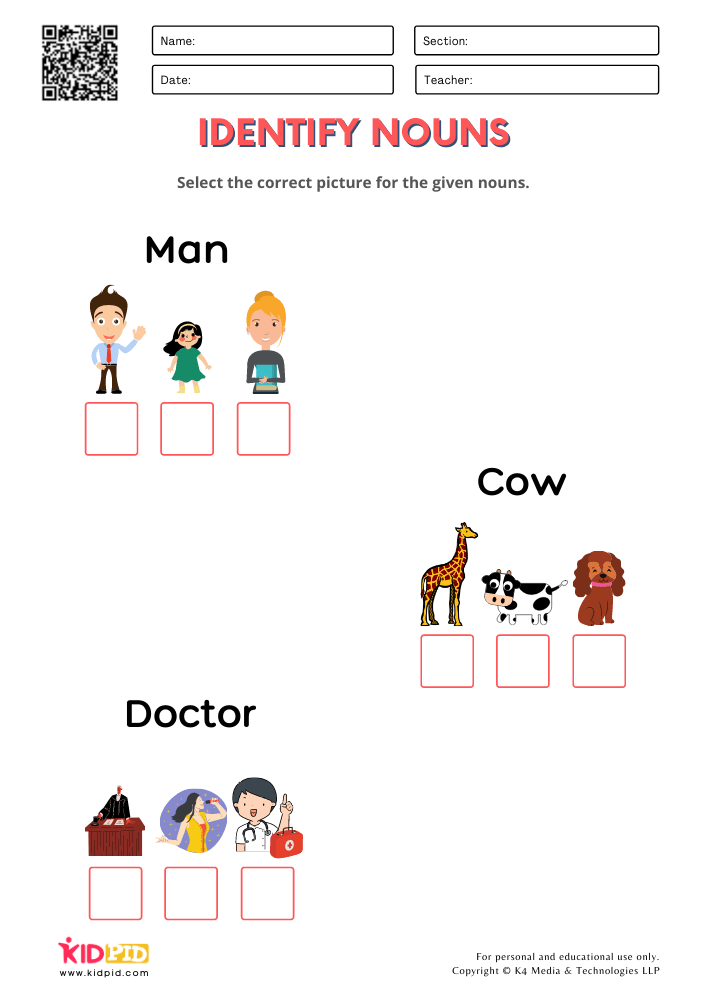 This is the second sheet. The child has to identify a church, nurse and a boat. 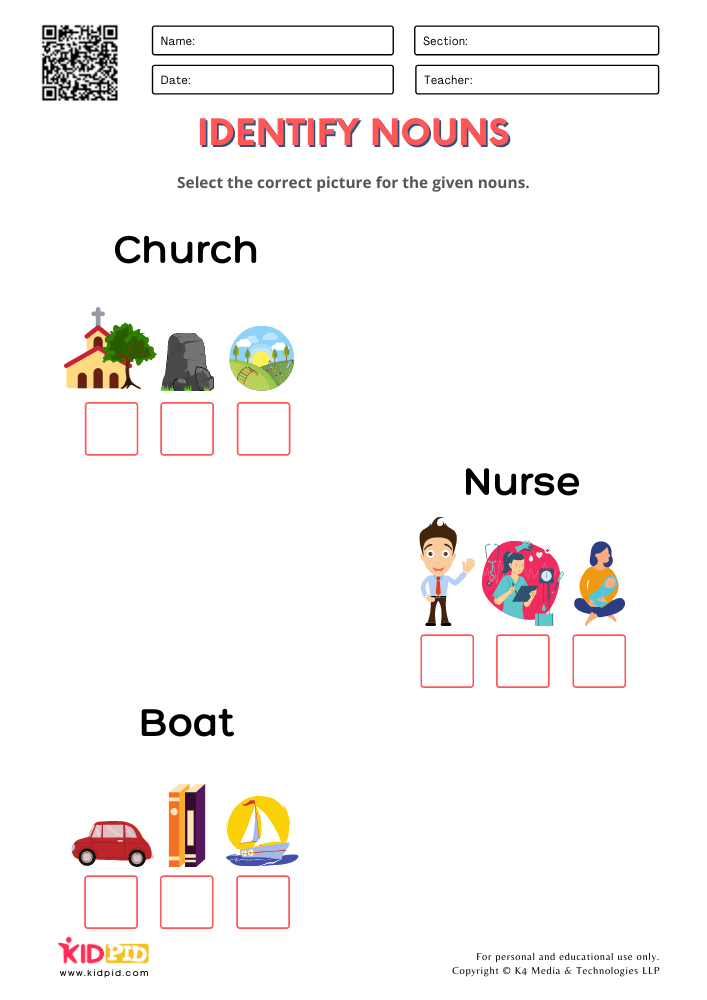 In the third sheet the kid has to identify a Parrot, apple and a rose. 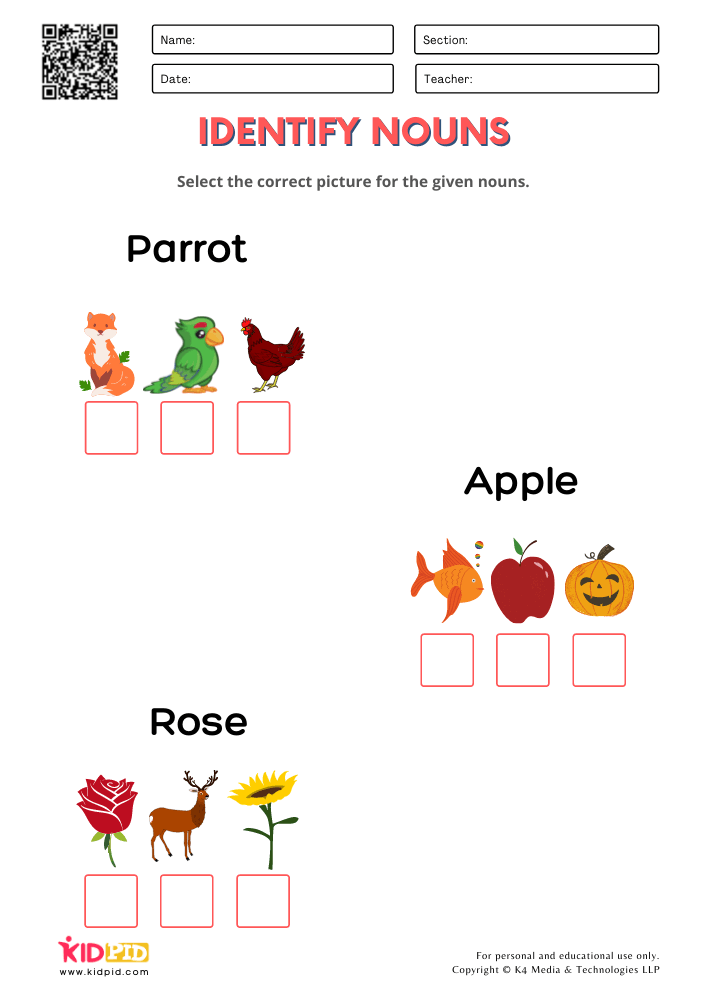 The fourth sheet requires the child to identify an Island, clock and a library. 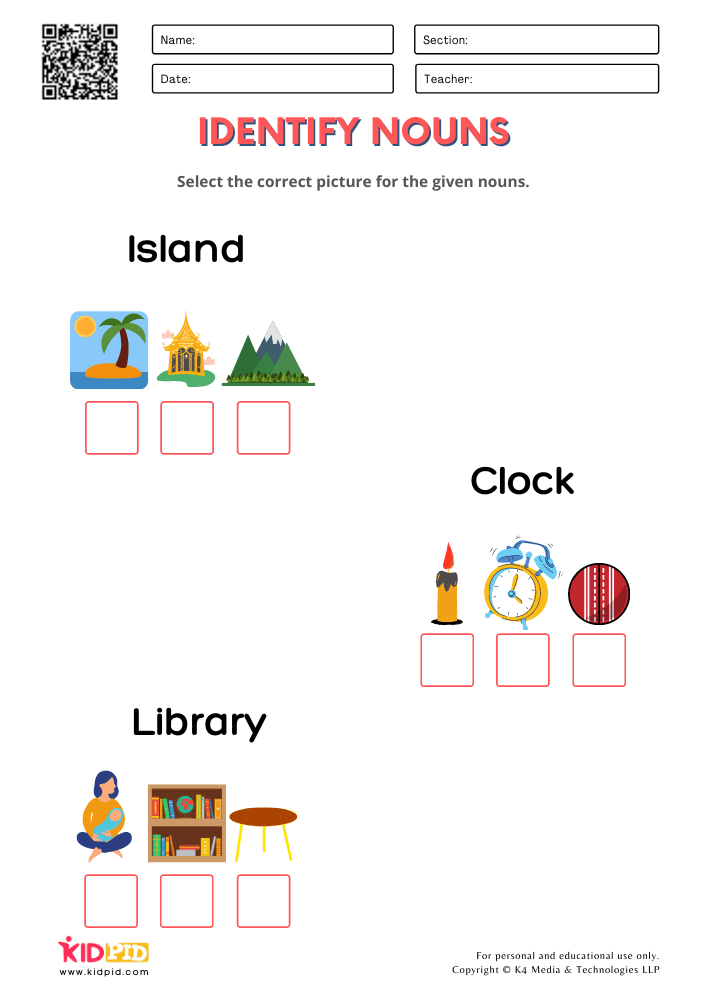 This is the fifth sheet. Here the child has to identify the nouns such as rock, zoo and elephant. 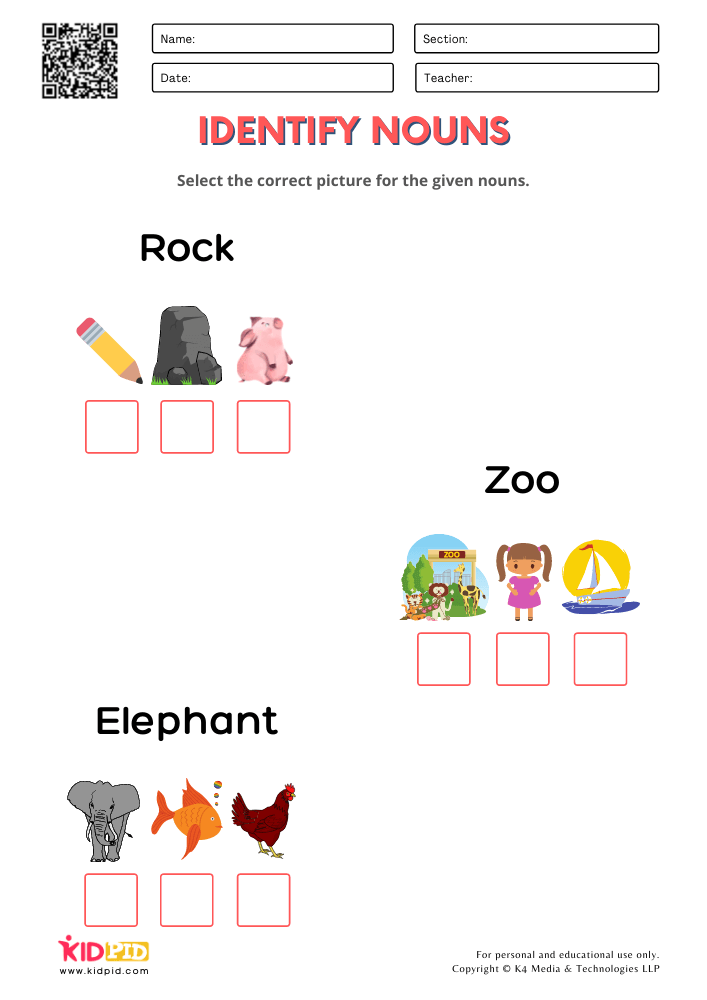 In the sixth sheet children will be able to identify nouns such as forest, nest, and strawberry. Through these images, a child will develop a better understanding of what nouns are. 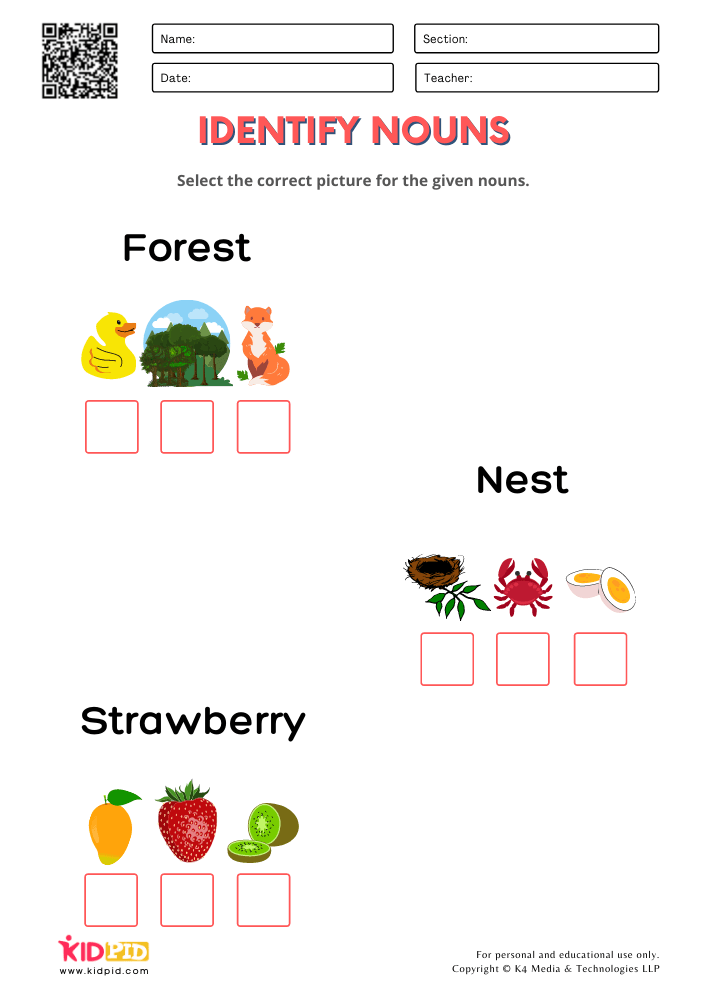 This is the seventh sheet that introduces the child to a carrot, airport, and mountain as nouns. 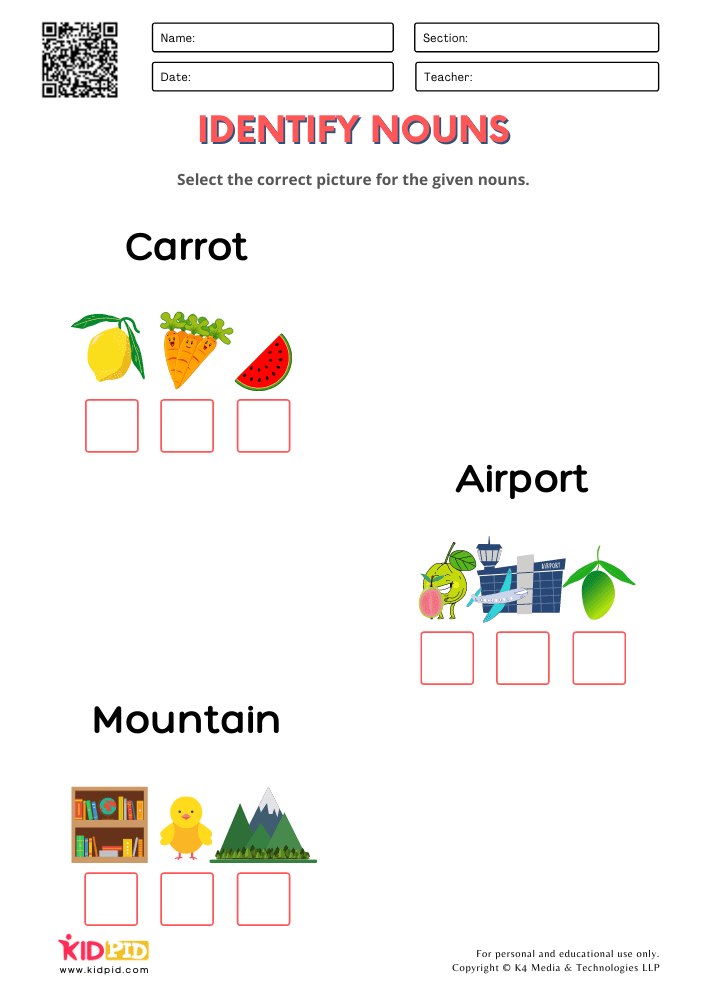 The eighth sheet of the series asks to identify a duck, village, and a library. 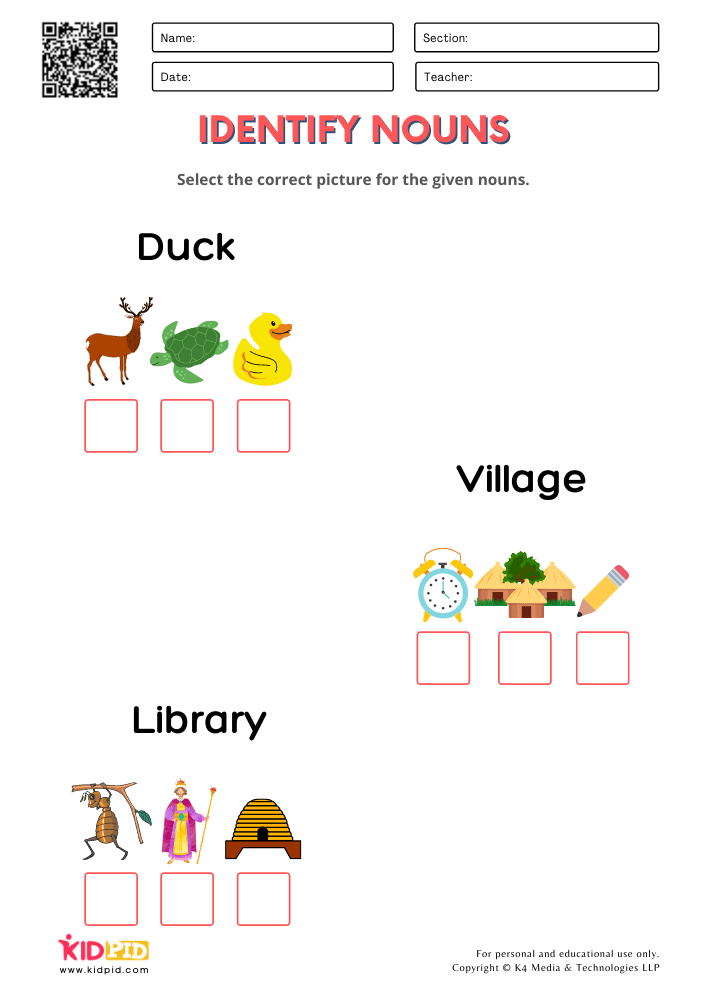 By now your kid must have developed an understanding of what nouns are. To test his understanding the following worksheets requires him to circle the images of the nouns from the pictures given below. 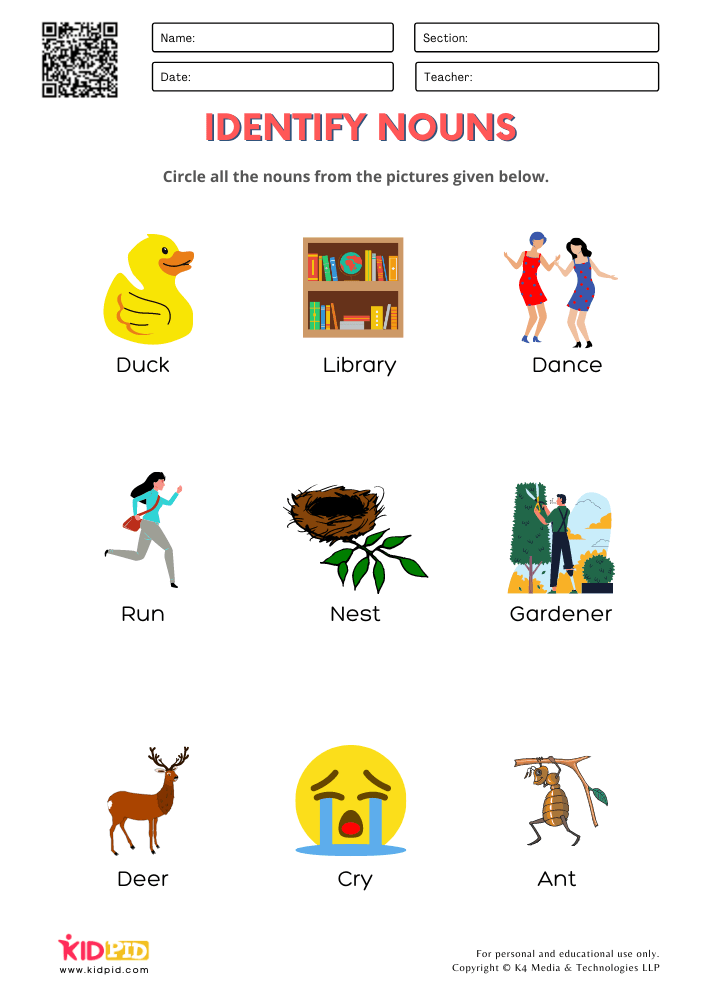 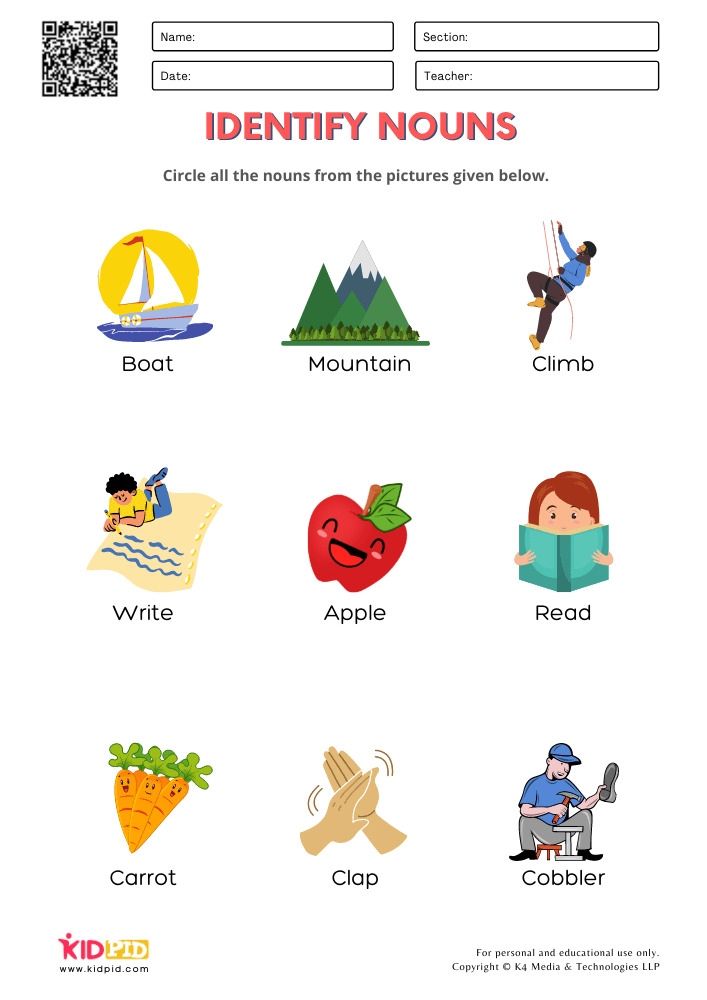 All our worksheets are available for download. These worksheets will enable the children to identify the different types of nouns used in the sentences. Download the worksheet and help your kid take the first step towards attaining proficiency in the English language!