The story of Ancient Rome is the story of evolution from what was a small town on central Italy’s Tiber River to one of the strongest and most influential empires that lasted for almost a thousand years.

The Roman Empire, during its peak years of power, won over most of continental Europe, Britain, some parts of western Asia, northern Africa and the Mediterranean islands.

During this period of expansion, Rome displayed qualities of a political, cultural and military dominance as shaped its future into becoming a parent to what is called the Western Civilisation today.

Among the many legacies of Roman dominance are – the widespread fame of the Roman languages (French, Spanish, Romanian, Italian and Portuguese), which originally derived from Latin, the Republican calendar, and Christianity as a major world religion.

According to the available sources and interpretations, Rome was founded in 753 B.C by Romulus and Remus, the twin sons of the god of war (known as Mars).

After killing his brother, Romulus became the first king of Rome. The kingdom followed a non-hereditary line of succession (son of the king did not automatically get a right to be the next king after his father). The kings were referred to as “Rex” which meant “King” in Latin.

All the kings after Romulus were elected by the Senate (the governing and advisory assembly of the wealthy people in the ancient Roman Republic).

Rome’s era of monarchy ended in 509 B.C. with the cruel seventh king – Lucius Tarquinius Superbus. Rome then turned into a Republic (derived from ‘res public’, or ‘property of the people’) after a popular uprising.

After the end of the monarchy, the power of the kings was given to two annually elected representatives called consuls or praetors. These magistrates though elected by the people were largely drawn from the Senate, which had a major hand in deciding the destiny of Roman government/monarch from the time of Romulus.

By around 300 B.C., the real political power in Rome slides back in favour of the Senate, which now only included descendants of the early Senate members and people from rich Roman families.

Rome’s military strength was vital to its influence and growth from as early as the regal period. The military capabilities of Rome helped it in successfully capturing its neighbouring people.

Successive military conquests led Rome to expand its kingdom to the Italian peninsula (Battle of Zama – 202 B.C.) and the Mediterranean Sea (Battle of Actium with the Egyptians – 31 B.C.) where they conquered the Greeks, Egyptians and Carthaginians. 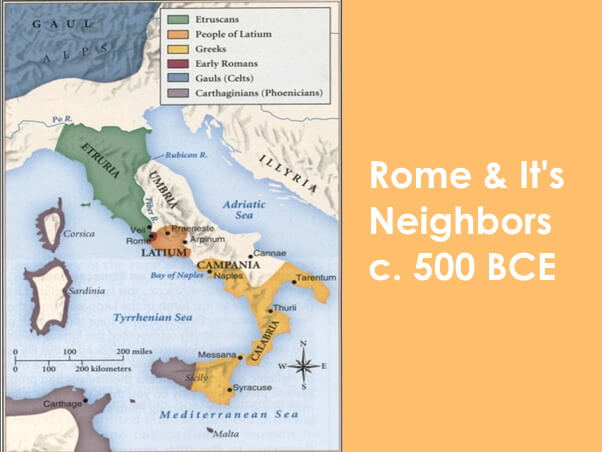 Similar conquests later helped Rome in winning over lands as far away as Britain and Iraq (Julius Caesar’s invasions of Britain, 55-54 BC).

The Romans incorporated and adopted the diverse cultures of the lands they conquered and thus aspects of their own culture evolved from time to time. For example, from Latium Rome acquired the Latin language, the empire’s official language; from Etruria Romans adopted their religion, alphabets, etc.

Internal Struggles in the Late Republic

Roman’s complex political institutions, growing corruption and injustice, rise in the disparity between the rich and poor and the growing exploitation on the poor class led to an era of internal unrest and violence. Attempts to address these social problems were made but were crushed every time by the murder of the reformer at the hands of their opponents.

As we have discussed earlier, the vast Roman Empire incorporated some parts of the culture of the regions it conquered, to its own. Most of the Roman architecture and art is highly influenced by ancient Greek. The upper caste Romans paid commissions to artists to imitate Greek sculpture and art for them. Greek architectural styles and elements, such as columns, were added to Roman structures

Roman roads were the most advanced travelling paths in the ancient world. Though they were primarily laid to facilitate military movements, they were also highly used for trade and travelling of goods, people and ideas.

One of the biggest cultural change in the empire was the rise of Christianity, which was declared the official religion of Rome. The religion found a strong follower in the empire – Constantine I, who became the first Roman emperor to convert to Christianity. He encouraged the religion to spread through Europe.

Julius Caesar was a rising star during his time and a celebrated Roman general, statesman and dictator. He is also one of the most famous and remembered consuls. He is credited for his military conquests over several regions like Spain and Gaul, for the Romans, and known for his critical role in ending the Roman republic and the rise of the Roman Empire.

The month of July, in which Caesar was born, is renamed in his honour. He also replaced the inaccurate old Roman calendar with the Julian calendar, which is still partially in force in the Eastern Orthodox Christian countries.

Caesar’s invasion of Italy ignited a civil war from which he emerged as a dictator of Rome for life in 45 B.C.

He was murdered less than a year later by a group of his enemies led by Marcus Brutus and Gaius Cassius.

Caesar’s great-nephew and adopted heir, Octavian and Consul Mark Antony joined forces to crush Brutus and Cassius. Octavian finally won over the forces of Antony and Queen Cleopatra of Egypt in the Battle of Actium.

By 29 B.C., Octavian was the ultimate leader of complete Rome. In 27 B.C., Octavian adopted the title of ‘Augustus‘ and became the first emperor of Rome. The reign of Augustus saw public support and the social reforms brought by him ensured two full centuries of peace and prosperity.

Four emperors took the throne after Nero’s death. The fourth, Vespasian, and his successors, Titus and Domitian attempted to restore Senate’s authority, promote public welfare and control the issues with the Roman court.

The reign of Nerva, who was selected by the Senate as the successor of Domitian, began another golden age in Roman history.

The inefficiency of Commodus brought the golden age of the Roman emperors to an end. His death at the hands of his own ministers sparked a civil war.

During the third century (200s AD), Rome suffered from a cycle of conflicts. 22 emperors who took the throne later in succession were killed by their own men, who brought them to power. At the same time, threats from outside kingdoms, such as the Germans and Parthians, were slowly eating away the empire and its riches.

After centuries of struggle and with only a few effective emperors, Rome collapsed, losing its provinces one by one from constant attacks by outsides.

In September 476 AD, a German prince Odovacar defeated the last emperor, Romulus Augustus, bringing an end to one of the strongest western empires in the history.