These compounds are known as metals. When one or more metallic compound/s are mixed, it’s called an Alloy. The most common example of an alloy is Steel.

Most metals can be found in their solid-state when they are at room temperature, but just like everything, an exception exists here too. Mercury, also a metal, is found to be in its liquid phase at room temperature. Examples of metals are tin, gold, lead, silver, zinc, and so on.

What are common in these metallic compounds?

Alloys are a mixture of one or more metallic compounds. Some of the most common alloys and the metals whose mixture it is are – 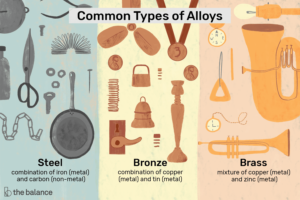 Fact: The first-ever discovered alloy was bronze. It was discovered during the prehistoric period. That is why the period is still known to us as the Bronze Age.