Where did Russia come from, why is it so big, and what are the differences between it and its neighbors? The answers lie in an epic story of seafaring warriors, nomadic invaders, and the rise and fall of a medieval state known as Kievan Rus. In the first millennium, a large group of tribes spread through the dense woodlands of Eastern Europe. Because they had no writing system, much of what we know about them comes from three main sources: archaeological evidence, accounts from literate scholars of the Roman Empire and the Middle East, and, lastly, an epic history called the Primary Chronicle compiled in the 12th century by a monk named Nestor. What they tell us is that these tribes who shared a common Slavic language and polytheistic religion had by the 7th century split into western, southern and eastern branches, the latter stretching from the Dniester River to the Volga and the Baltic Sea.

As Nestor’s story goes, after years of subjugation by Vikings from the north, who, by the way, did not wear horned helmets in battle, the region’s tribes revolted and drove back the Northmen, but left to their own devices, they turned on each other. Such chaos ensued that, ironically, the tribes reached out to the foreigners they had just expelled, inviting them to return and establish order. The Vikings accepted, sending a prince named Rurik and his two brothers to rule. With Rurik’s son, Oleg, expanding his realm into the south, and moving the capitol to Kiev, a former outpost of the Khazar Empire, the Kievan Rus was born, “Rus” most likely deriving from an old Norse word for “the men who row.” The new princedom had complex relations with its neighbors, alternating between alliance and warfare with the Khazar and Byzantine Empires, as well as neighboring tribes. Religion played an important role in politics, and as the legend goes, in 987, the Rus prince Vladamir I decided it was time to abandon Slavic paganism, and sent emissaries to explore neighboring faiths.

Put off by Islam’s prohibition on alcohol and Judaism’s expulsion from its holy land, the ruler settled on Orthodox Christianity after hearing odd accounts of its ceremonies. With Vladimir’s conversion and marriage to the Byzantine emperor’s sister, as well as continued trade along the Volga route, the relationship between the two civilizations deepened. Byzantine missionaries created an alphabet for Slavic languages based on a modified Greek script while Rus Viking warriors served as the Byzantine Emperor’s elite guard. For several generations, the Kievan Rus flourished from its rich resources and trade.

Its noblemen and noblewomen married prominent European rulers, while residents of some cities enjoyed great culture, literacy, and even democratic freedoms uncommon for the time. But nothing lasts forever. Fratricidal disputes over succession began to erode central power as increasingly independent cities ruled by rival princes vied for control. The Fourth Crusade and decline of Constantinople devastated the trade integral to Rus wealth and power, while Teutonic crusaders threatened northern territories. The final blow, however, would come from the east. Consumed by their squabbles, Rus princes paid little attention to the rumors of a mysterious unstoppable hoard until 1237, when 35,000 mounted archers led by Batu Khan swept through the Rus cities, sacking Kiev before continuing on to Hungary and Poland.

The age of Kievan Rus had come to an end, its people now divided. In the east, which remained under Mongol rule, a remote trading post, known as Moscow, would grow to challenge the power of the Khans, conquering parts of their fragmenting empire, and, in many ways, succeeding it.

As it absorbed other eastern Rus territories, it reclaimed the old name in its Greek form, Ruscia. Meanwhile, the western regions whose leaders had avoided destruction through political maneuvering until the hoard withdrew came under the influence of Poland and Lithuania. For the next few centuries, the former lands of Kievan Rus populated by Slavs, ruled by Vikings, taught by Greeks, and split by Mongols would develop differences in society, culture and language that remain to the present day. 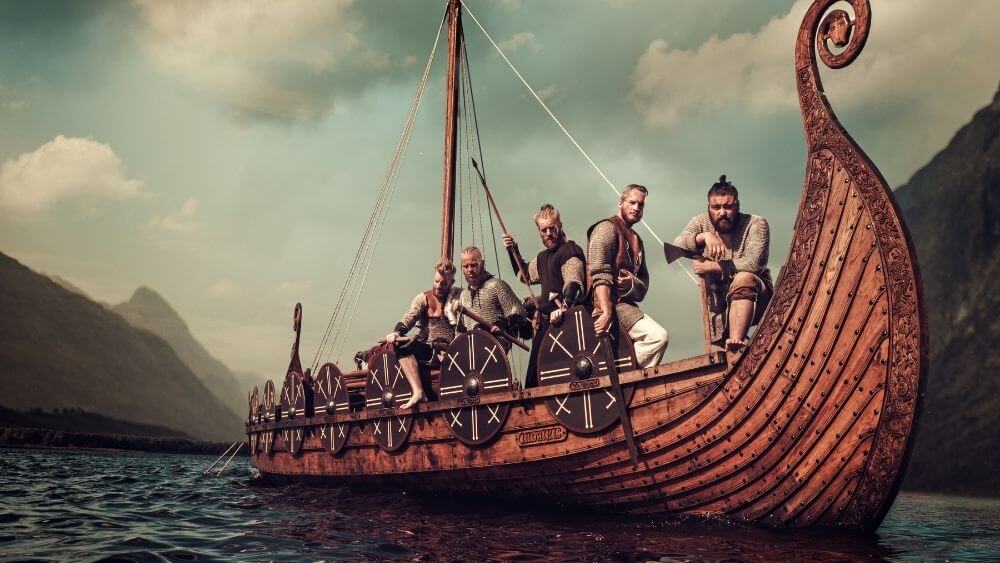 Vikings is the modern-day name given to seafaring Norse pirates. They came from southern Scandinavia which is present-day Denmark, Norway and Sweden combined. They were…